Talk of the Tracks NEWCASTLE

Kicking The Can scores at the 28th attempt of asking 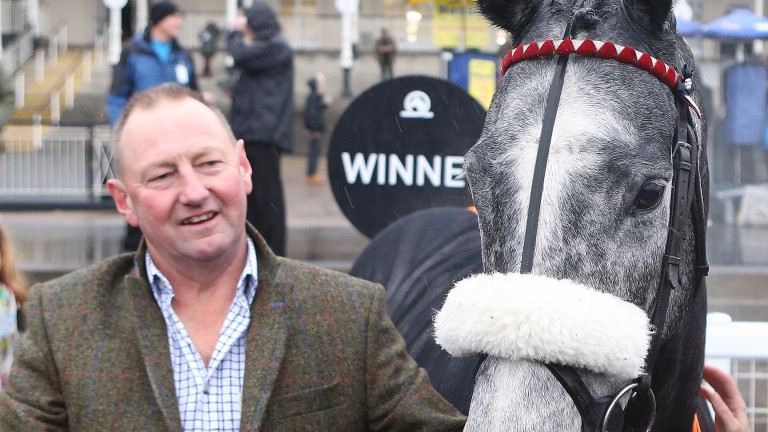 Owner Dennis Mawer was happier than a dog on a trampoline as Kicking The Can finally won a race at the 28th attempt.

The David Thompson-trained five-year-old had finished second on four of his 12 starts in Mawer's colours prior to yesterday's win in the 1m2f maiden, and the owner said: "We've been waiting a long time for that! He's been knocking at the door but everything's just had to fall right for him and David Nolan has given him a perfect ride."

Asked whether the breakthrough win might be a springboard for further success, Mawer added: "Sometimes the penny drops and hopefully he'll enjoy all the fuss and do it again, I hope he does."

Nolan went on to complete a double on the Karen McLintock-trained Taopix in the Class 6, 1m4½f handicap.

Cornwallville could be on his travels

A trip to Dubai could be in the offing for Cornwallville, who won the 6f handicap in a thrilling finish.

The Roger Fell-trained top weight had won his only previous all-weather start at Chantilly in July 2014, and after winning by a neck and a short-head under Graham Lee, owner Stephen Louch said: "He's not been firing on all cylinders just lately, but he looked superb when I went to the yard on Wednesday, so we thought we were in with a chance.

"Hopefully he can get out to Dubai – his handicap mark is sort of borderline but now he might get in."

Dubai is also the plan for Louch's Caspian Prince, who won at Meydan last February and broke the 5f track record at Dundalk last month when making all for Listed honours.

Godolphin's Kananee made it four wins from five starts as he prevailed by a neck from Sutter County in the 6f juvenile conditions stakes, the first fast-track qualifier for the All-weather Championships.

Kevin Stott was the man on board the 7-4 favourite, who is trained by Saeed Bin Suroor, and the jockey said after the 32Red-sponsored contest: "Nothing really wanted to go on and he was a bit too keen for the first furlong and a half, but he battled well.

"He's still green, he's only run four times, and he's done it the hard way, but in a good way."

Kananee's sole defeat came on soft ground at Royal Ascot and Betway, who sponsored three races on Thursday's card, priced him up as the 5-1 favourite for the three-year-old sprint final at Lingfield on Good Friday.

Paul Mulrennan left the toon with a double after the Michael Dods-trained Holmeswood justified odds of 4-5 for owner David Armstrong in the opening two-year-old maiden, and the Class 5, 1m4½f handicap going the way of Heart Locket.

The four-year-old filly is trained by Mick Easterby and owned by golfer Lee Westwood and his agent Andrew "Chubby" Chandler.

After Kicking The Can got off the mark at the 28th attempt attentions switched to Cliff in the finale, who was attempting to land his first win after 29 defeats. The 3-1 favourite ran a good race in the second division of the 7f handicap, but could finish only third. The wait goes on.

FIRST PUBLISHED 6:16PM, NOV 17 2016
Sometimes the penny drops and hopefully he'll enjoy all the fuss and do it again, I hope he does