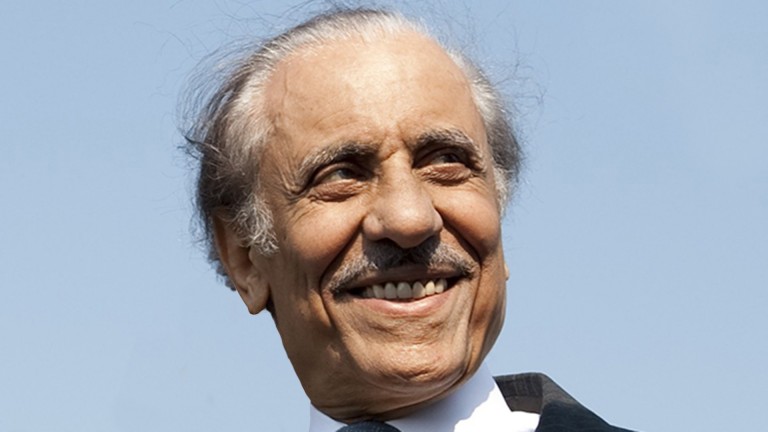 Khalid Abdullah: hugely influential owner-breeder has died at the age of 83
Edward Whitaker
1 of 1
By Tom Ward and David Milnes UPDATED 7:51PM, JAN 12 2021

Owner and breeder Khalid Abdullah, in whose green, white and pink silks the likes of Frankel, Dancing Brave and Enable ran, has died at the age of 83.

One of the leading names on the global racing scene over the last 40 years, Abdullah had over 500 stakes winners including 118 at Group/Grade 1 level.

Just a year after having his first runners in Britain in 1978, Abdullah celebrated his first Group 1 success with Known Fact in the 1979 Middle Park Stakes at Newmarket.

Known Fact went on to become Abdullah's first Classic winner in 1980 after his success in the 2,000 Guineas and the first of the litany of superstars to carry his owner's name.

Douglas Erskine Crum, CEO of Juddmonte Farms, said: "The whole of Juddmonte feels a huge sense of loss. Prince Khalid will always be remembered as a quiet, dignified, benevolent family man whose horses spoke for him.

"He leaves a legacy that will stand the test of time. His contribution to the development of the thoroughbred will have long-lasting effects."

The twin pinnacles of Abdullah's operation in the 21st century were dual Arc winner Enable and the incomparable Frankel, who lit up not only the owner's life when deep into his eighth decade but also that of his ailing trainer Sir Henry Cecil. 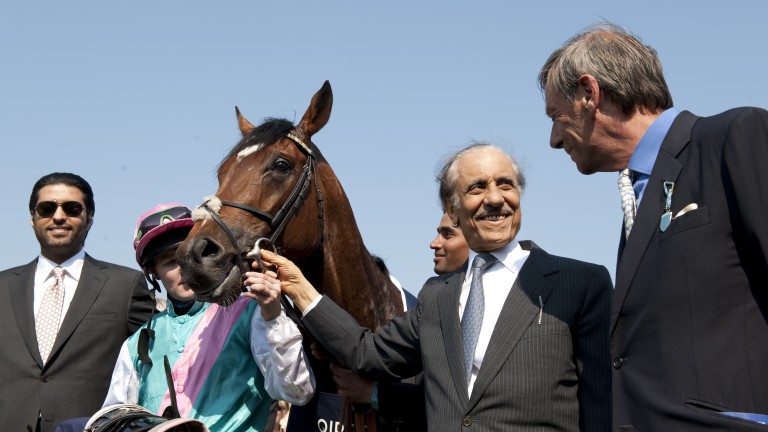 His widow Lady Cecil, who took over the licence at Warren Place,  paid her own glowing tribute to what both Abdullah and Frankel meant to her late husband.

She said: "Prince Khalid was a gentleman and was so loyal to Henry. Sending him Frankel for him to train in the last few years of his life really helped him carry on. He was a good friend to Henry and without his support at one stage of his career he wouldn't have been able to continue, but he believed in him.

"After that he was very kind to allow me to keep Noble Mission to train, and I remember he told me he watched him win [the Champion Stakes] at Ascot at home with all his family.

"Not only did the Prince send Henry horses but he sent him good horses. He had the likes of Midday, Twice Over, Passage Of Time and ultimately Frankel. It was obviously the Prince's call to send him Frankel and it gave him something to get up in the morning for."

Here's a look back into Prince Khalid's outstanding and iconic contribution to Racing pic.twitter.com/pdBs73tqly

Enable's trainer John Gosden said: "Prince Khalid Abdullah first enjoyed going racing in the 1950s as a young man in Paris. This sparked his bold and thorough plan to establish an international breeding operation in the late 1970s and was an illustration of his brilliant mind. In a period of 20 years he established himself as both a European and American champion breeder.

"His charming, urbane and humorous manner was coupled with a great strategic approach both in business and his horseracing and breeding operation. A very private and patrician gentleman, Prince Khalid was a very strong family man for whom it has been a great honour and privilege to train for 38 years." 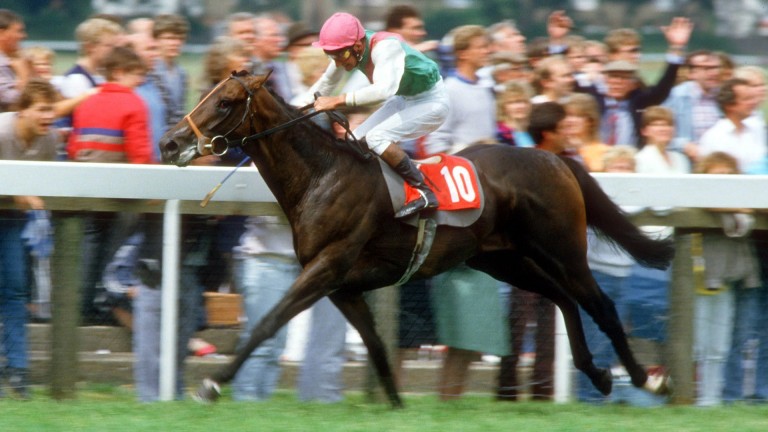 Dancing Brave: just one of Khalid Abdullah's greats on the track

Guy Harwood, who trained Dancing Brave, said: "It's very sad. He was a very fine gentleman who had a great innings and has left behind him huge racing and breeding enterprises.

"We were very fortunate in the 1980s to have trained some of his best horses and enjoyed doing so. His racing empire was his great love.

"It was his creation. He liked to be involved in every facet. He bought good horses, he then started his studs – he bred the best to the best and had great success."

Juddmonte trailblazer Known Fact was trained by Jeremy Tree, as was Abdullah's first Prix de l'Arc de Triomphe winner Rainbow Quest and the crack miler Danehill, who went on to become a breed-shaping stallion with Coolmore.

Roger Charlton took the reins from Tree at Beckhampton and in his first full season with the licence he sent out the Derby and Prix du Jockey Club double with Quest For Fame and Sanglamore four days apart before going on to train such notable horses as Bated Breath, Cityscape and Kind, the dam of Frankel.

Charlton said: "I had the good fortune to have known him for over 40 years and we all know the huge contribution that he made and what an amazing professional operation that Juddmonte has become.

"He's been at the head of the table, he's made decisions, mating plans, and I think everybody found him to be charming, humble and a pleasure to work for.

"We had some good days and some bad days, that's how it is. Like everybody he bounced back very well and he understood racing – he understood that you have to be a good loser as well as celebrating the great victories, of which he had many."

The men and women who trained for Juddmonte reads like a Who's Who of world racing, and Sir Michael Stoute and Andre Fabre joined in the tributes.

"It was a great pleasure and privilege to train for Prince Khalid," said Stoute, who landed the Derby-Arc double in 2010 with the Juddmonte homebred Workforce. "He built the Juddmonte empire, turning into one of the most iconic and successful breeding operations in the world. Racing has lost a very special friend and supporter, but his remarkable legacy will live on." 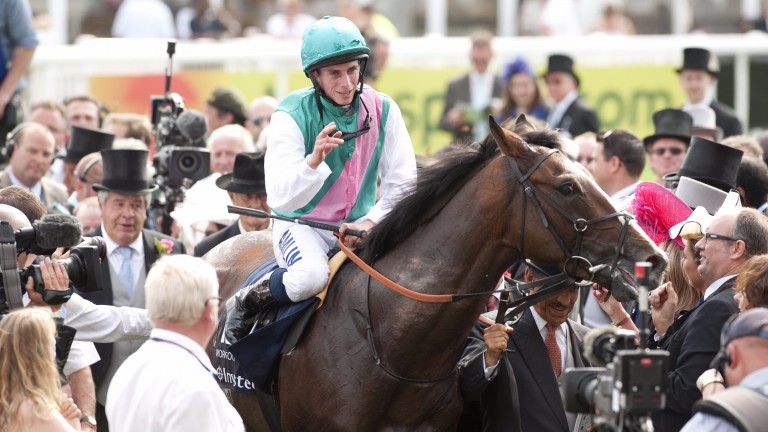 Fabre's list of champions to carry the French, pink epaulette, version of the silks encompasses British and Irish Classic winners such as Wemyss Bight, Toulon and Zafonic, as well as Breeders' Cup heroine Banks Hill and more recently another Juddmonte Arc winner in Rail Link.

But it is as a man that Fabre most fondly remembers Abdullah.

"Everybody knows his achievements as an owner and breeder, one of the greatest of all time you could say," said Fabre. "But above all he was a true aristocrat. Not in the sense of class but he was a true prince in everything he did.

"I would say everyone around him was eager to do well for him, without any pressure and just because he was a nice man and everybody wanted things to go well for him."

FIRST PUBLISHED 4:06PM, JAN 12 2021
Racing has lost a very special friend and supporter, but his remarkable legacy will live on

Royal Ascot 2021: Gold Cup runners, odds and the verdict Cheltenham clerk of the course Simon Claisse says 'it's time to step aside' Confirmed runners and riders for Friday's Coronation Stakes at Royal Ascot Goodwood still planning for unrestricted Glorious meeting despite lockdown delay 'What else would I do at my age?' - 80-year-old trainer wins with only horse What's on this week: the biggest names in racing are heading to Royal Ascot