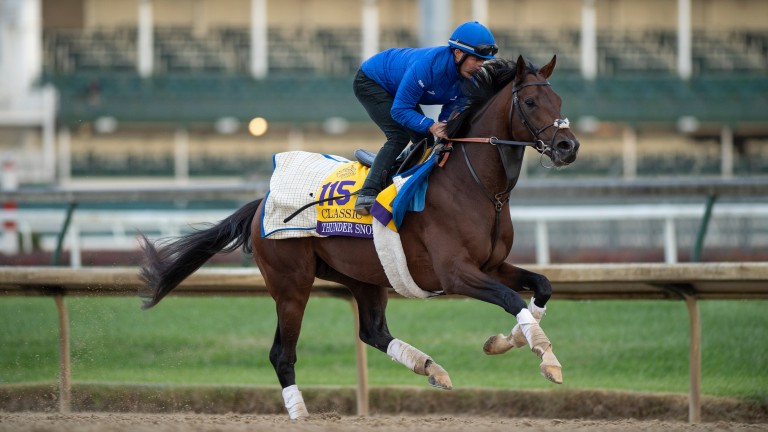 Thunder Snow will bid to become the first ever dual winner of the world's richest race, the Dubai World Cup, later this month and has his prep at Meydan on Super Saturday.

The Group 1 Al Maktoum Challenge R3 (2.55) is the feature contest at the tenth and final meeting of the Dubai World Cup Carnival in which Thunder Snow faces nine rivals.

Regular rider Christophe Soumillon, who was suspended on Super Saturday last year, is in the saddle and Thunder Snow – third under Soumillon in the Breeders' Cup Classic on his most recent start – looks likely to be hard to beat.

Bin Suroor's Godolphin colleague Charlie Appleby has yet to win the Al Maktoum Challenge R3. He saddles dirt debutant Nordic Lights but has much stronger claims in the Group 1 Jebel Hatta (3.30), the turf feature he won last year with Blair House.

Blair House seeks to become the first dual winner of the race and is the mount of Brett Doyle this year – suggesting he may be Appleby’s fourth string, with William Buick aboard Wootton, James Doyle, who rode Blair House last year, on Loxley, and Mickael Barzalona aboard First Contact.

Dream Castle was gelded at the end of last season and is unbeaten since, winning the Singspiel Stakes and Al Rashidiya.

From his Meydan satellite yard, Simon Crisford saddled a carnival double last Thursday and his Century Dream looks the most likely to take advantage if the Godolphin quintet misfire.

Other runners to note on a hugely valuable card include Blue Point in the Nad Al Sheba Turf Sprint (1.10), Prince Of Arran, who contests the Dubai City of Gold (2.20) and 2018 Swedish horse of the year I Kirk in the Mahab Al Shimaal (12.00), who made a stunning Dubai debut in January.

Darren Bunyan, trainer of Hit The Bid
We're very happy with him. He's in the best form he's been in since he came here. He's finished second in his two races and, while Blue Point will be hard to beat, our horse ran well behind him over five furlongs at the course last year. I think he'll get six furlongs and we're looking forward to a big run.

Bruce Raymond, racing manager to Ali Ridha, owner of Gifted Master
Gifted Master went out there last weekend and we're very happy with his condition. We think he's fit enough to run a nice race and this will be a stepping stone to World Cup night.

Charlie Appleby, trainer of Blue Point
Running on Super Saturday wasn't part of the original plan, which was one run and the Al Quoz Sprint, but perhaps he was too fresh on World Cup night last year when withdrawn at the start. We were delighted with his winning comeback, and the extra furlong isn't an issue, so hopefully he's the one to beat.

Charlie Appleby, trainer of Old Persian and Spotify
Old Persian failed to stay in the St Leger in what was otherwise a very pleasing season, when he kept progressing, winning at Royal Ascot as well as the Great Voltigeur. He's thrived in Dubai but will certainly benefit from the outing with an eye on the Sheema Classic. Spotify deserves a crack at this because he's done nothing but improve throughout the carnival.

Saeed Bin Suroor, trainer of Racing History and Team Talk
Team Talk always gives his best and we thought he was worth a try over this trip, whereas Racing History is proven over the distance and has been running well throughout the carnival.

Bruce Raymond, racing manger to Abdulla Al Mansoori, owner of Desert Encounter
Desert Encounter was supposed to run at Meydan last month but they wouldn't let him fly due to the equine flu outbreak. He worked really well the other day before he went out there and we think he's a fitter horse this year than he was last.

Erwan Charpy, trainer of Logrado and Furia Cruzada
Logrado is going to improve for the run and Furia Cruzada should appreciate the return to dirt – Frankie Dettori rides her and knows her from Europe.

Saeed Bin Suroor, trainer of Thunder Snow
Defending his Dubai World Cup crown is the target and, after a busy 2018, we've given him a nice break. We took him to Meydan the other day and he worked well, but he'll certainly improve fitness wise for the run.

Ahmad Bin Harmash, trainer of New Trails
He's done nothing but improve but this is another step up in class.

Salem Bin Ghadayer, trainer of Gronkowski, Montsarrat and Capezzano
Montsarrat is a tough, genuine performer and Capezzano keeps on improving but will need to again. Gronkowski is a new horse for us but an exciting one.

Doug Watson, trainer of Cosmo Charlie
It's a tough race but we've been campaigning him as a Dubai World Cup horse so this is the obvious test for him.

Charlie Appleby, trainer of Nordic Lights
We had a few for the Jebel Hatta so we thought we'd try him on dirt because his style of racing suggests it might suit. Thunder Snow is the one to beat but the remainder are rated very closely.

Charlie Appleby, trainer of First Contact, Wootton, Blair House and Loxley
Everything fell into place for Blair House in this last year and hopefully the gaps open again for him. First Contact seemed to enjoy being ridden positively last time so probably will be again, and Wootton delighted us in the Zabeel Mile. That was his first start for us, he settled well and finished his race off strongly. Other than failing to stay in the St Leger, Loxley was progressive in Europe last year and is one we're very much looking forward to in 2019.

Oisin Murphy, rider of Century Dream
He ran very well before probably just tiring close home on his seasonal debut. That should have put him spot on for this and he's a genuine Group 1 horse so deserves his chance.

Saeed Bin Suroor, trainer of Dream Castle
He's taking the same path as Benbatl last year and has done everything we've asked of him. This is the toughest task yet but we're very happy with him.

FIRST PUBLISHED 6:00PM, MAR 8 2019
He's thrived in Dubai but will certainly benefit from the outing with an eye on the Sheema Classic