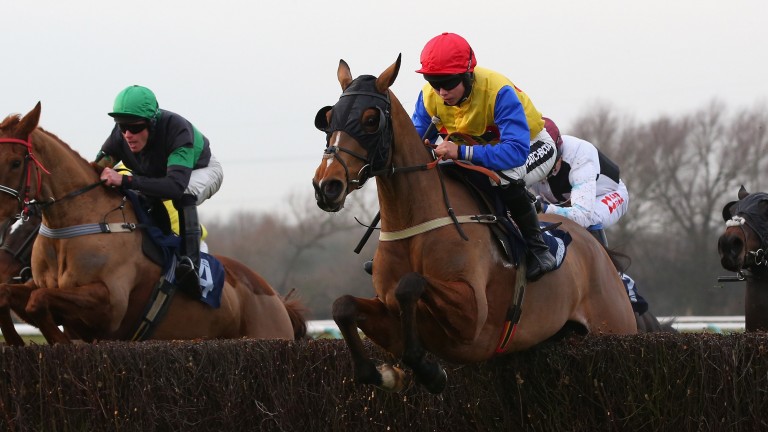 Silent Steps (nearside) clears a fence on their way to victory at Southwell on December 4.
Alex Livesey
1 of 1
By David Milnes UPDATED 7:40PM, DEC 13 2018

It could be a very big afternoon for Neil King at Cheltenham, as 70 minutes after stable star Lil Rockerfeller takes the stage the trainer has another live chance with Silent Steps in this mares' contest.

The seven-year-old is one of two penalised runners in the 11-strong field and could still be well in judging by the way she registered her first win over fences at Southwell last week.

The front-runner did not see another horse from the home turn when hammering Megaboost by 23 lengths that day and could dominate again. She was blinkered first time there, however, and sometimes headgear can be less effective on the next run.

Silent Steps is owned by a partnership who are newcomers to racing and who got involved only when attending King's open day in September.

The trainer said: "It's a massive thing for the three owners, who got involved in the horse just a few months ago and after three runs they're going to Cheltenham with a horse with a favourite's chance.

"I've been riding Silent Steps out myself and she's full of beans. The blinkers helped her last time and hopefully they will again."

Evan Williams won this two years ago with outsider Still Believing and is doubly represented this time with Skewiff and recent emphatic Sedgefield winner Inch Lala.

Inch Lala has a 7lb penalty for his dismissal of Gogo Baloo in an eventful five-runner race a week ago, in which one of his main rivals was withdrawn after refused to start, while two others exited before the seventh fence.

Williams said: "Inch Lala won an eventful race last time, for which the handicapper hasn't been too harsh on her, and the reality is that she didn't have a hard race so it made sense to run her again.

"You don't get too many chances to run around Cheltenham with this sort of horse so we're giving it a go."

On his other runner, Williams added: "Skewiff isn't bad on her day and could make the shake-up."

Song Saa has appeared in both previous runnings of this contest, faring best when third to Ms Parfois a year ago, and is back for a third crack after a couple of solid efforts of late.

Tom George, who also fields Miss Night Owl, is hopeful Song Saa has come on for her seasonal return, when she finished a modest fourth to Marienstar at Kempton.

He said: "Song Saa likes it around Cheltenham and seems to have come on for that.

"Miss Night Owl managed to get some black type at Bangor last time and won't be disgraced."

Iain Jardine, trainer of River Icon
We've never had a winner at Cheltenham but River Icon is a hardy filly who is as tough as nails. She'll be doing all her best work at the end and can hopefully pick a few off to be placed.

John Groucott, trainer of Midnight Target
She ran into one last time but goes there with a nice chance. The drying ground will suit.

Henry Daly, trainer of Black Tulip
Ideally she'd want further but there's not a lot of choice at the moment. Her jumping is improving and she should give a good account.

Fergal O'Brien, trainer of Troubled Soul
She didn't jump off at Sedgefield last time, which we're hoping was a one-off, but she has seemed fine at home since. Maybe it was the travelling she didn't like, so we're heading closer to home.

Did you know you can bet with multiple bookmakers on the Racing Post website and app? Here’s how:

FIRST PUBLISHED 6:00PM, DEC 13 2018
I've been riding Silent Steps out myself and she's full of beans