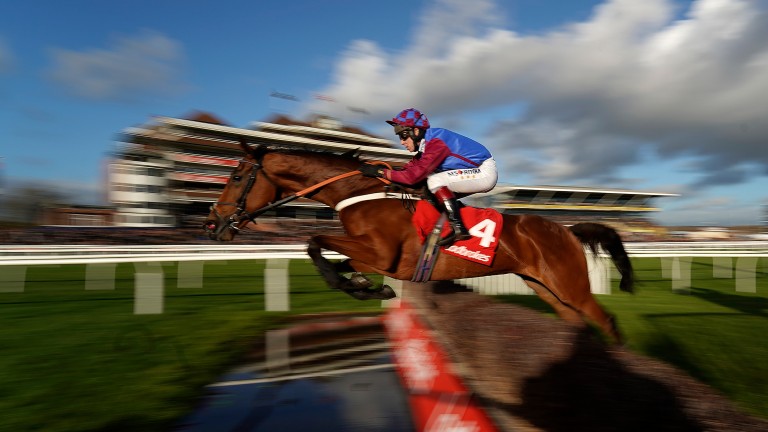 Can Brits bag the loot?

There is only one British runner on day two of the Dublin Racing Festival but the red carpet is being rolled out for La Bague Au Roi, who bids to trump some of Ireland's brightest young talent in the Flogas Novice Chase.

Britain's champion jockey Richard Johnson is returning to a racecourse where he twice landed the Irish Gold Cup aboard Florida Pearl.

His latest Leopardstown mount cannot claim to have the following of that winter hero but she has a sizeable fan club of her own, one whose size grew after a tremendously game success in the Kauto Star Novices' Chase.

Trainer Warren Greatrex immediately nominated this Grade 1 showpiece as the next target and has been true to his word, meaning La Bague Au Roi must defeat Cheltenham Festival winner Delta Work if she is to maintain her unbeaten record over fences.

"We've had this race in mind for quite some time," said Greatrex.

"Irish trainers support our festivals, so I think it's important to show we're willing to support this festival. Hopefully having a British runner in one of the Grade 1 races will increase interest as well."

She certainly will, and she might very possibly return home with another big win on her record.

"She proved how good she is at Kempton and I think she's come on again since then," said Greatrex.

"If that's the case she'll definitely be in the mix, particularly with her 7lb mare's allowance. Jumping is her asset, so Leopardstown should suit her, and I think two miles and five furlongs is probably her optimum trip as well."

Aidan Howard has done a tremendous job with Winter Escape, a smart hurdler in the past for Alan King but an even better chaser since relocating to Ireland.

Like La Bague Au Roi and Delta Work, Winter Escape has won three times over fences and there was plenty to admire about his most recent Grade 3 success at Punchestown.

Frank Berry, racing manager to owner JP McManus, said: "He was always a fair horse over hurdles, to be fair to him, and he ran well in the County Hurdle for Alan King.

"We always thought a lot of him but he had a few niggly problems. This is a big step up but he's in good form and Aidan is very happy with him."

Delta out but Hardline still goes for Elliott

Delta Work, the 9-2 second favourite for the RSA Chase, was ruled out on Sunday morning due to ground conditions, but Gordon Elliott and Gigginstown are still represented by Hardline, who took the scalp of Getabird in Limerick's first ever Grade 1 race.

The trainer said: "Hardline has done little wrong and while he's going up in distance, that shouldn't be an issue."

Jessica Harrington, trainer of Jetz
He's better going left-handed, so Leopardstown is a good place for him. We've taken the hood off as we're trying to get him to relax. I think he'll better like that. The further he goes the better, and he should appreciate the ground. He's there with a chance of a place.

Pat Doyle, trainer of Kaiser Black
He's had a summer break but that's because we're training him with the Irish National in mind. We're probably biting off more than we can chew but he'll handle the ground. He's in good form but will come on for the race.

Joseph O'Brien, trainer of Mortal
He ran well over Christmas in the big three-mile race, which was only his second run over fences. He's now dropping down in trip, which is a bit on an unknown, but he's in good shape.

FIRST PUBLISHED 6:00PM, FEB 2 2019
Irish trainers support our festivals, so I think it's important to show we're willing to support this festival