Can De Boinville land his own race?

Gunnery makes a quick turnaround under a 6lb penalty after winning by 12 lengths at Doncaster over Christmas and should make a bold bid for a follow-up off bottom-weight.

A winner over 1m4f on the Flat in 2016, the son of Le Havre has been through a few hoops since then, but a return to front-running tactics and this distance yielded a second win over jumps on Town Moor six days ago.

Not the most fluent over his obstacles, Gunnery was clear when making a mistake at the last that day, but may well have to put in a slicker round this time in a race named after his jockey, Nico de Boinville

Gunnery, who is one of two runners for Nicky Henderson – the other is Mill Green – is likely to be favourite and market leaders have won the last two runnings of this race.

Are there too many front-runners?

Totterdown was another wide-margin winner from the front last time when obliging by ten lengths over course and distance in November and has been earmarked for this ever since.

The nine-year-old has been put up 12lb for his comprehensive defeat of Nebuchadnezzar on heavy ground that day and is likely to encounter similar conditions this time as the going is described as soft, heavy in places on the hurdles track.

Trainer Fergal O’Brien said: "He’s up 12lb for his Sandown win and will be off a career-high mark. It will be hard for him. However, he’s in great form and wears his heart on his sleeve.

"We’ve given him a longer break between races this time and he’s fresh and well. He only has one way of racing and that’s to get out in front; let’s hope he can stay there."

Blu Cavalier was winning for the first time for Ali Stronge when scoring tidily at Doncaster last time, a performance that attracted the attention of the stewards as the ten-year-old had previously finished last at Ascot.

The son of Kayf Tara was said to have come on for his first run of the season that day and could well move forward again despite a 4lb rise.

Trainer Stronge said: "Blu Cavalier won well last time and the stiff two miles and soft ground at Sandown should suit him. He goes there with a nice chance."

Chris Gordon, trainer of Remiluc
He's had a long time off with a tendon injury and we could have done with a bit more help from the handicapper to be honest as he's only been dropped 4lb. It will be nice to get him back but he'll need it. 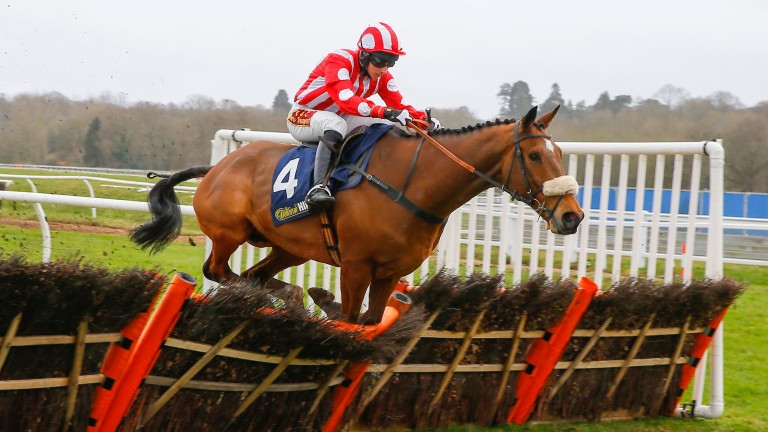 Remiluc: "could have done with a bit more help from the handicapper"
ST Parade7/7/16

Philip Hobbs, trainer of Smarty Wild
Ideally, he would like better ground, but he coped with it when fourth over course and distance last time and goes there with a chance in a competitive race.

Gary Moore, trainer of Distingo
He put up a good comeback run the other day after a long layoff and as long as he doesn't bounce he should go well. He's not well handicapped as such but has a decent racing weight off 10st 11lb.

Evan Williams, trainer of John Constable
He's nowhere near the force of old but didn't run a bad race last time and if we can get some of the prize-money that goes down to sixth we'll be happy.

FIRST PUBLISHED 6:00PM, JAN 3 2020
He'll be going up more in the future than the 6lb penalty he carries here, so he remains on a very workable mark