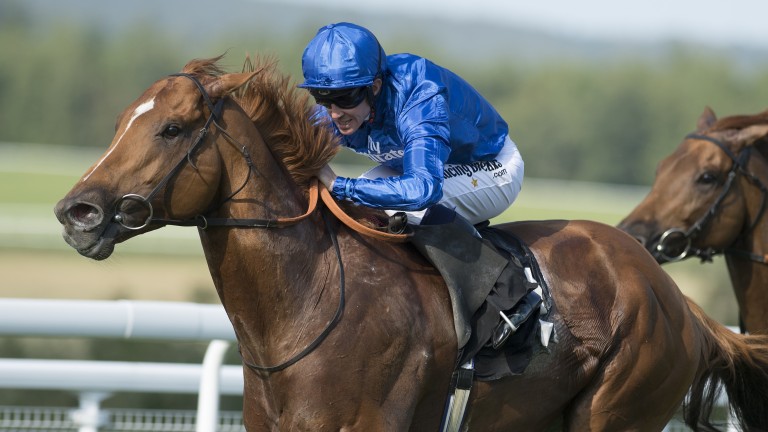 Dutch Connection, winner of four Group races to date, reverts to his favourite trip of seven furlongs after running a blinder over a mile in the Group 1 Lockinge Stakes on his seasonal reappearance last month.

The Godolphin-owned six-year-old, whose greatest moment came when landing the Group 2 Lennox Stakes at Glorious Goodwood in 2016, was beaten only three and a half lengths at Newbury into fourth behind Rhododendron.

“He ran a blinder on his first start of the year in the Lockinge and we've been thinking about going for this race ever since,” said Hills.

“He should have a decent chance as long as the ground stays on the fast side. He travelled really well at Newbury, but there has always been a question mark over whether he truly stays the mile, so dropping back to seven furlongs makes sense.”

Seven days on from winning the Derby with Masar, Charlie Appleby sends D’Bai, a four-year-old who runs in the same colours as Dutch Connection, out to bat.

D’Bai, winner of a Pontefract Listed race on soft ground during his juvenile days, has yet to make the breakthrough in Group company, but his last-time-out second to The Tin Man at Windsor reads well and suggests he should make a bold bid.

Appleby said: “He's stepping back up to seven furlongs following a very pleasing start to his European campaign at Windsor.

“He broke the track record over this distance at Meydan on his first appearance of the year, and things didn’t quite pan out for him in the Al Fahidi Fort.

“Conditions at Haydock should suit him and he should be very competitive.”

Is Tabarrak primed to take next step up ladder?

Tabarrak, one of just two course-and-distance winners in the contest, has yet to win a Group race, but he went mighty close in the Group 3 Sovereign Stakes at Salisbury last August when beaten a neck by Ballet Concerto.

Still lightly raced for a five-year-old, with just 13 runs under his belt, Tabarrak won nicely at the Merseyside track last time out, and there could be even better to come.

Trainer Richard Hannon said: “Tabarrak is a talented horse who won a Listed race over course and distance last time. He came out of that race well and has been working nicely since.

“He didn’t run much of a race in the Doncaster Mile when he never travelled on the soft ground. I feel he has conditions to suit and, if he can reproduce that last run, I'd expect him to be right there.

“He's won at Listed level on three occasions so we're hoping for a good step up into Group company.”

Can Emmaus show his best on lively ground?

The Roger Varian-trained Emmaus, winner of three of his four starts, is likely to encounter fast ground for the first time on a racecourse.

All three victories came at Leicester with some ease underfoot, so he has plenty to prove as he steps up to Group company.

Varian, who places this type of improver particularly well, said: “Emmaus is in good form and he has trained nicely since his victory at Leicester.

“This looked the logical place to step him up into Pattern company, although he will need to improve again in what appears on paper a good, competitive renewal of the race.”

FIRST PUBLISHED 6:00PM, JUN 8 2018
He ran a blinder on his first start of the year in the Lockinge, and we have been thinking about going for this race ever since