Will Daklondike win for the second year running?

Colin Tizzard is the last trainer to do the double in this race with Cannington Brook in 2011 and 2012.

He won the second of those carrying 11st 12lb and the David Pipe-trained Daklondike will attempt to repeat that feat.

The seven-year-old has had a torrid time of it since winning this race by a length a year ago, with a second place at Newbury last month his only run of note.

However, all those races were on good to soft ground and he’s finally got his preferred going on Saturday, having won this on heavy last year.

He has won all three of his races on heavy ground, so should have a great chance in testing conditions.

After his 11th place finish last time, Pipe said: “He ran okay in the Ladbrokes Trophy. The ground was too quick for him and he did keep galloping.

"He’ll love conditions at Haydock and won the race last year. Obviously, he’s now higher in the handicap, but if he gets out the right side of bed he must have a chance.”

Can Richard Hobson land his third win in four races?

Although he hasn’t had many runners this season, Richard Hobson has been in fine form of late with two winners from his three runners this month and will be hoping Lord Du Mesnil will step up again from his win last time out. 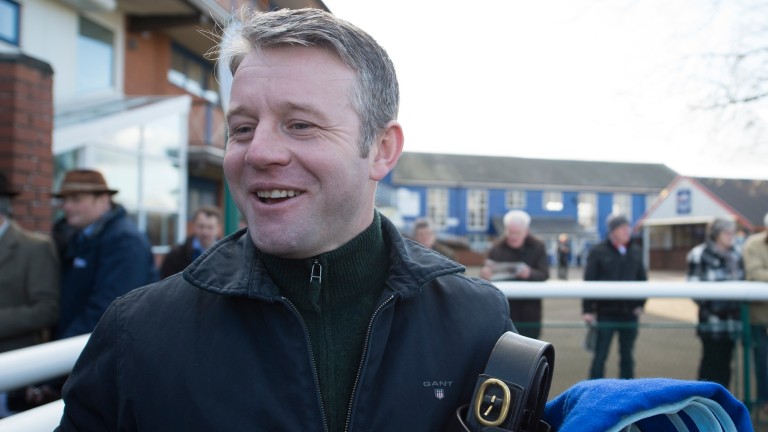 Richard Hobson: "He’ll love these conditions and got a lovely weight. I think he’ll run a massive race"
Edward Whitaker

That victory came on heavy ground at Newcastle, so conditions should suit, although he does have a 5lb rise to contend with.

Hobson said: “He’s a progressive type. He’ll love these conditions and got a lovely weight. I think he’ll run a massive race.

“He’s in a good frame of mind now, but he’s taken a year to acclimatise from France and things weren’t going quite his way last year. Chasing is his game and he’ll love this ground. He’s one of the few going into the race with some nice form to his name.”

Nigel Twiston-Davies, trainer of The Hollow Ginge
It’s a track that suits him and so does the ground, so he should be fine.

Caroline Bailey, trainer of Crosspark
We found out after his last run that the horses just weren’t right then and their blood was all wrong; but the last week or two we’ve had a couple of winners and they’ve all come right, their blood has come right, so I think possibly he wasn’t at his best that day. We’ve given him a good break and he’s fresh and well now. I don’t think he minds heavy ground, but we haven’t run him on it much because last year was so dry, but he’ll stay. He’s got a big weight to carry, but he’s earned that. If he’s at his best and goes on the ground he’s got a good chance.

Caroline Bailey: "If he’s at his best and goes on the ground he’s got a good chance"
Martin Lynch

Jeremy Scott, trainer of Orchardstown Cross
He’s fine; he needs to bounce back after a disappointing run at Ascot, but he’s well. It’s probably the first time he’s run on seriously heavy ground, so we don’t know how he’ll cope with it, but in every other respect I would be very happy with the race and the way he is. Everything that was in behind him at Exeter has either gone on to win or run really well, so I think he’s capable of taking his place in a race like this.

Oliver Greenall, trainer of Late Romantic
He’s in great form at home. He absolutely loves heavy ground; his last run just wasn’t heavy enough for him at good to soft and he has to have it bottomless, which it looks like it’s going to be. It’s obviously a good race and there’s a couple of good horses that will be hard to beat, but he’s in good form and he should be in the shake-up.

FIRST PUBLISHED 6:00PM, DEC 20 2019
He’s now higher in the handicap, but if he gets out the right side of bed he must have a chance

Sprinting legend The Tin Man to be honoured at Haydock in September New Sky Bet Sunday Series to offer £200,000 in bonuses to owners and jockeys