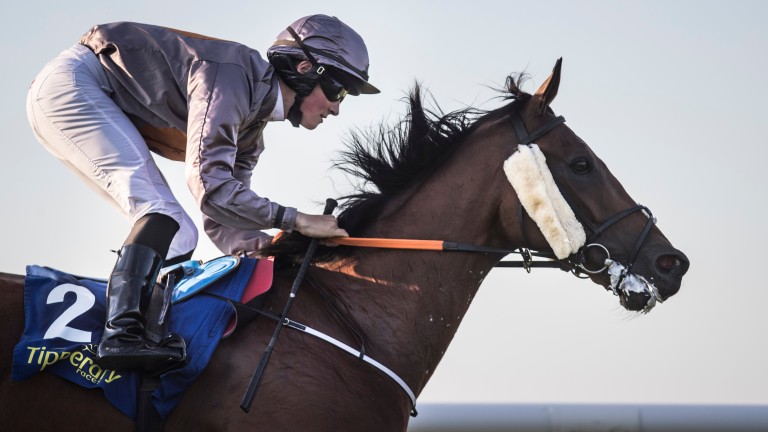 Aussie Valentine: one of two runners in the race for trainer Adrian McGuinness
Patrick McCann
1 of 1
By David Jennings UPDATED 9:07PM, MAR 23 2019

Can Aussie make it fifth-time lucky?

If at first you don't succeed, try again, and again, and again, and again. This will be Aussie Valentine's fifth appearance in the Irish Lincoln, the first premier handicap of the Flat season in Ireland, and few would begrudge the evergreen eight-year-old a first victory in the race given his previous exploits.

Rewind 12 months and Aussie Valentine was third to On The Go Again, while he filled the runner-up spot three years on the trot between 2015 and 2017.

This time around he is fit from the all-weather, having warmed up at Dundalk, while Ado McGuinness, who won the race in 2005 with Victram, has also revealed that Aussie Valentine has been away to Leopardstown for a grass gallop in preparation for his big day.

The trainer said: "Aussie Valentine is in great form. He had two nice prep runs at Dundalk and he's had a couple of grass gallops. He galloped after racing at Leopardstown and worked very well, so we're happy with him.

"He's a few pounds higher than last year but he likes that type of race. He'll be fit from his runs at Dundalk, so that'll be a big help as well."

If Aussie Valentine is unable to make it fifth-time lucky, perhaps Master Speaker will be the one to bring home the bacon for McGuinness. He is better known as a sprinter but his trainer thinks a mile might suit him.

"We're stepping Master Speaker up in trip," said McGuinness. "He finished strongly at Galway last year over seven furlongs and will hopefully run a nice race. Sprinters don't really go for this race, but the owners are keen to run.

"He ran a cracker in the Cambridgeshire and he is older and stronger now."

Can Fahey claim the crown at last?

Richard Fahey has had even more goes than Aussie Valentine at winning the Irish Lincoln. He has fired 12 darts since 2011 but none have managed to hit the bullseye.

He is triple-handed on Sunday and Paul Hanagan takes the ride on Calvados Spirit. Does that mean he is the number-one hope for the stable? Well, he would be only for stall 18, according to the trainer.

Fahey said: "I've been trying to win the Irish Lincoln for a while. I've been third a couple of times and as you can see I'm having a real go.

"Calvados Spirit has the worst draw. He's the one I'd have been fancying but whether he can win from stall 18, I don't know – it's not ideal.

"Society Red won over a mile last year and should be suited by the track and ground. Crownthorpe is what he is, but he's in good order."

Will race-fitness count for Theobald?

So many of the maximum field of 20 are making their first starts of the season, but that cannot be said of the Jim Bolger-trained Theobald, who is flying fit after making five appearances at Dundalk since October.

The strapping son of Teofilo has won three of his last four starts, including his last two, and he is running off the same mark of 97 that he won his most recent handicap at Dundalk off.

It is worth remembering that Theobald ran in the Dewhurst and Racing Post Trophy as a juvenile, so has always been held in high regard by his powerful connections.

Jessica Harrington, trainer of Marshall Jennings and Charcor
Marshall Jennings has a lot of weight and faces a tough task, but he's wintered well and he won first time out last season – at Naas. He's a big, strong gelding who will cope fine with conditions and there's a nice Listed race at Leopardstown for him next week. I just hope Charcor won't be too fresh and keen. He'll relish conditions, he never really got the ease he wanted last year.

Joe Murphy, trainer of Insignia Of Rank
It's our first runner of the year, so you never know what to expect. We're disappointed with the draw [17] and any time we've had something with such a wide draw at Naas they've never featured. He's rated 97, though, so has to go somewhere.

Tom Hogan, trainer of Honor Oak
She's in good form and is well drawn, so we would be hopeful of a good run. She always seems to run well fresh, so we fancy her to go nicely.

FIRST PUBLISHED 6:00PM, MAR 23 2019
He galloped after racing at Leopardstown and worked very well so we're very happy with him