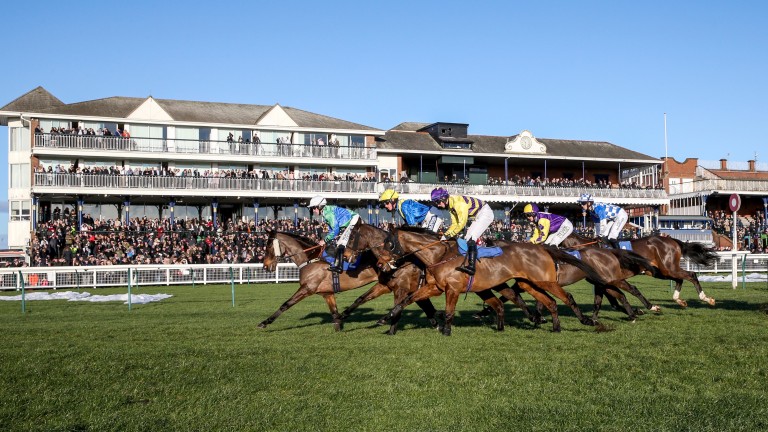 Race fans can enjoy the best of both worlds today when quality jumps racing shares the billing with classy action on the Flat.

Those who like their sport more like last weekend's Grand National fixture get another dose of long distance chasing with the Coral Scottish Grand National at Ayr.

But if your head has already turned towards the summer and the Flat season then Greenham Stakes day at Newbury should not disappoint.

At Ayr Vicente bids to make history by winning a third Scottish National, while at Newbury Expert Eye tries to put his Qipco 2,000 Guineas bid on track in the Greenham.

The ground at Ayr has been changed to good (from good, good to soft in places). Trainer Nicky Henderson has walked the course this morning and said: "It's definitely quickening, it was last night. That won't be a problem for Gold Present [in the Scottish National], we've been taking him out this season waiting for this sort of ground."

There is also a mixture of codes elsewhere in the afternoon with Thirsk and Limerick staging Flat cards and the jumpers going at Bangor. It's all about the Flat in the evening with Nottingham and Wolverhampton staging fixtures.

Ed Quigley will tell you in ten seconds which horse he thinks will win the Scottish Grand National.

But if you have more time to spare Tom Segal's assessment of the day's racing is a must read for members.

Segal has unearthed a value bet in the Scottish Grand National but also provided a run down of his best selections from Newbury.

Both have strong claims and as you would expect trainers Nicholls and Elliott are not talking down their prospects in Lee Mottershead's preview of the marathon.

The What's The Word team have everything covered in this weekend's edition. Thom Malone and guests discuss the Scottish Grand National.

And have a view on the outcome of the 2,000 Guineas trial, the Greenham Stakes.

FA Cup semi-final weekend starts with a belter as Manchester United travel to Wembley to take on Tottenham, who get to play the match at their temporary home.

The whole weekend's action is previewed in the football postcast.

There was also momentous news on Friday when Arsene Wenger  announced his departure as Arsenal manager so it is well worth reading Mark Langdon's assessment of the candidates who could replace him.

Nicky Henderson has never possessed an abundance of long distance chasers and from over 40 Grand National runners he has yet to win the race. It's the same story with every other version of a National so a lot rides on Gold Present at Ayr today.