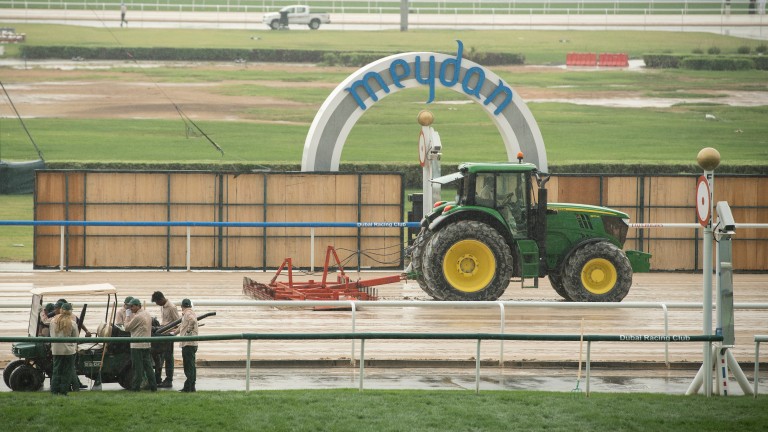 Unusually, there is more rain around in Dubai than there is in Britain this morning which has put a different slant on things over at Meydan, where Arrogate tops the bill in the Dubai World Cup (4.45).

The dirt track is now muddy (from fast) while the neighbouring turf course is now yielding (from good).

The world's highest-rated horse heads the usual international cast in the Gulf which also features Postponed who bids for successive wins in the $6 Million Dubai Sheema Classic.

Closer to home, the jumps take centre stage with the Grade 2 Mares Novice Hurdle Finale heading events at Newbury, who have four races live on ITV4 whilst the same channel show three races from a valuable card at Kelso.

In the wake of the going changes at Dubai here are four horses to follow on the easier surface:

Heartbreak City 12.50
Highly progressive last season and with two wins from his last three encounters with ground on the soft side of good he is one of only two or three in here who is likely to benefit from easing conditions.

The Right Man 2.00
Ertijaal and Limato have it to prove on easy ground, unlike this French raider, who looked in his element on it when winning a Group 3 last backend and should strip fitter for his recent solid return.

Mutakayyef 3.30
Looked better than ever last season, when he was particularly impressive on good to soft on his reappearance - the second time he has scored on ground with cut. Has a terrific record when fresh, so there should be no fitness concerns.

Prize Money 4.05
He has really come to himself since a hood was fitted four starts ago. Worse off at the weights with Postponed for a head victory last time, but has gone well both times he has run on ground with cut and 10-1 looks a big price about a horse in such rude health.

Newbury: Good to Soft, good in places (from good to soft, soft in places on hurdles course)

Stratford: Good to Soft, soft in places (from soft, heavy in places on the chase course)