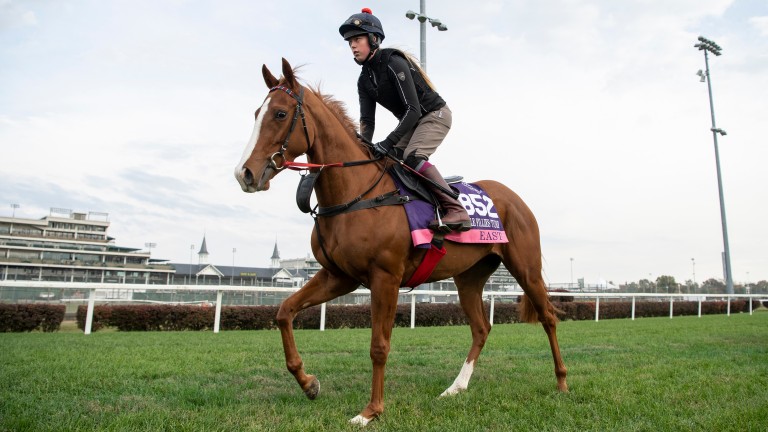 East: will line up in the Emirates Poule d'Essai des Pouliches at Longchamp
Edward Whitaker
1 of 1
By Scott Burton 11:15AM, MAY 9 2019

Kevin Ryan is hoping patience will be rewarded after skipping last Sunday's Qipco 1,000 Guineas with East in favour of a crack at the French equivalent this weekend.

The exciting daughter of Frankel took the leap from Hamilton maiden winner to landing a Group 3 at Saint-Cloud last autumn, before putting in an extraordinary performance when overcoming a terrible wide draw to beat all bar Newspaperofrecord in the Breeders' Cup Juvenile Fillies' Turf at Churchill Downs in November.

East is one of 12 fillies remaining in the €500,000 Emirates Poule d'Essai des Pouliches at Longchamp on Sunday, with Prix de la Grotte winner Castle Lady supplemented on Thursday.

"We left her in at Newmarket as well but we were always waiting for France," said Ryan, who has scored at Group 1 level in France with The Grey Gatsby and Brando.

"She has done fantastic over the winter. She was a little bit of a shell last year but she’s really filled out and grown and I’m really looking forward to running her."

With two of her three starts at two having come abroad, Ryan has no fears on the travel front, while the Longchamp layout suits a filly like East with a real turn of foot.

Ryan said: "She's a very easy filly to deal with. When she went to America she got straight off the plane and ate everything up. She hardly lost any weight so I've no worries that way."

A total of 13 colts were left in the Poule d'Essai des Poulains at the supplementary stage on Thursday, including Persian King, the only horse to have beaten 2,000 Guineas hero Magna Grecia.

Leopardstown 2,000 Guineas Trial winner Never No More is one of two Aidan O'Brien possibles, while Advertise could be set for a quick return to action after failing to figure in the first Classic of the season in Britain last Saturday.

FIRST PUBLISHED 11:15AM, MAY 9 2019
She was a little bit of a shell last year but she?s really filled out and grown. I?m really looking forward to running her