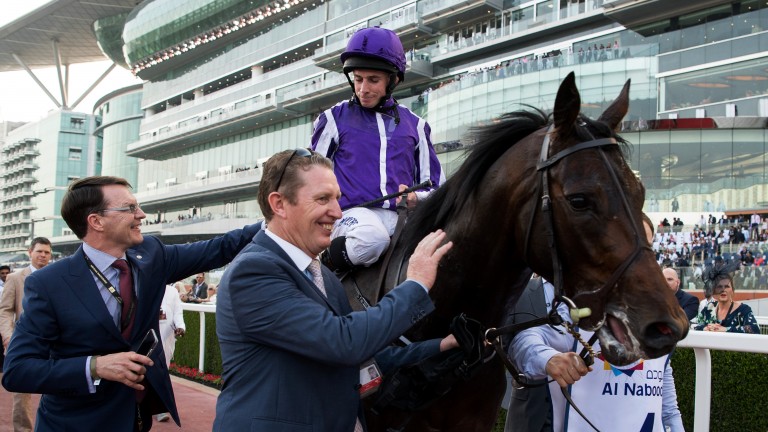 Victory parade: Mendelssohn and Ryan Moore are greeted by Aidan O'Brien and Pat Keating after storming to victory in the UAE Derby
Edward Whitaker (racingpost.com/photos)
1 of 1
By David Baxter UPDATED 4:07PM, APR 3 2018

Ryan Moore was on Tuesday priced at 4-7 by Betway to be at Churchill Downs rather than Newmarket on May 5, a potential date with destiny for Mendelssohn and Saxon Warrior.

The firm go 6-5 that Moore is riding at Newmarket on Qipco 2,000 Guineas day, while Paddy Power also have the Kentucky Derby as favourite, quoting 4-6, with Newmarket 11-10.

Moore may never have a better chance to win the Kentucky Derby, with Mendelssohn's awesome performance at Meydan last Saturday resulting in him being promoted to favourite for the race with British and Irish bookmakers. On Tuesday he was a best-priced 6-1.

Explaining their prices on the 'where will he be?' market, Betway’s Alan Alger, said: “Winning the Guineas for a third time or getting the leg up on the clear favourite in the Kentucky Derby? That’s the question Ryan Moore faces and at 4-7 we think he’ll be heading Stateside to ride Mendelssohn.

“The son of Scat Daddy’s performance on Saturday was stunning and, with Moore clearly already a big fan of the Kentucky Derby, we think he’ll miss out on a big day at Newmarket to get aboard this special horse in one of the world’s most exciting races.”

A Racing Post twitter poll which asked 'which race do you think Ryan Moore will ride in?' concurred, with 60 per cent voting for Churchill Downs as of 4pm.

Moore, who has already won the 2,000 Guineas twice, said after Mendelssohn's stunning 18-and-a-half-length success in the UAE Derby: "The Kentucky Derby is a race on my bucket list but we’ll have to see what’s best to do closer to the time."

Five years ago Moore had his first ride in the 'Run For The Roses', and was blown away by the meeting, saying then: "I can honestly say the Kentucky Derby at the weekend was the best day's racing I have ever experienced."

Should he decide to stay closer to home, Moore is likely to be aboard 5-1 2,000 Guineas favourite Saxon Warrior, who could take in a trial before the race.

Trainer Aidan O'Brien said last month: "Saxon Warrior has put on a lot of condition since last season and we haven't ruled out the possibility of running him in the Guineas Trial at Leopardstown [on April 14], although it's more likely he'll go straight to Newmarket once we think he's ready."

Which race do you think Ryan Moore will ride in? Vote via our Twitter Poll @RacingPost

FIRST PUBLISHED 11:20AM, APR 3 2018
The Kentucky Derby is a race on my bucket list but we’ll have to see what’s best to do closer to the time

'Plenty of options' as one-time Derby hope Highest Ground bounces back Ryan Moore recruited to ride US-trained hope for King's Stand O'Brien at a loss over Bolshoi Ballet's defeat following 'lifeless' display Kieren Fallon on how to ride the Derby – and his idea of the winner The one and only: Bolshoi Ballet must show why he was singled out for Derby My take on the High Definition saga which rocked the Derby during the week