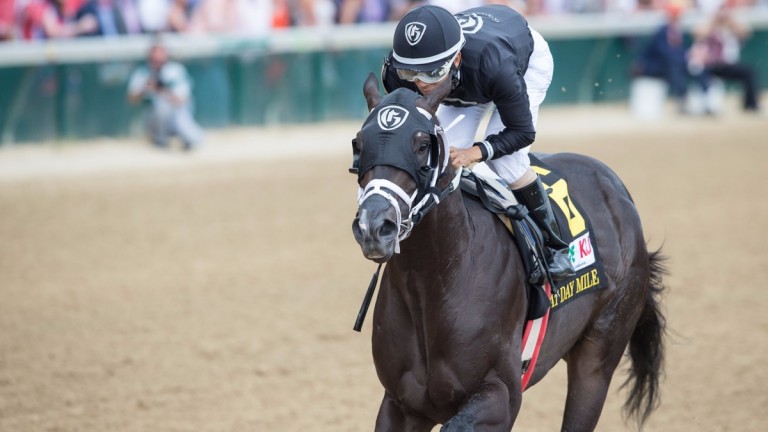 With a powerful come-from-behind victory in the Sam Davis, McCraken (Ian Wilkes/Brian Hernandez) cemented his position as a leading contender for this year's Kentucky Derby with a track-record performance at Tampa Bay.

The son of Ghostzapper took his unbeaten record to four with an accomplished display on his seasonal debut, sitting at the back of the main body of the field before circling his rivals on the far turn and then kicking away down the stretch

Sent off 6-4 favourite, McCraken scored by a comfortable length and a half over Tapwrit in a time of 1min 42.45sec which beat the previous best for the distance set by last year's Tampa Bay Derby winner Destin.

Given that trainer Ian Wilkes had steadfastly maintained he had left plenty to work on, this was an excellent performance altogether. "We've got a long way to go," said Wilkes, speaking to the Blood-Horse.

"This is not a one-race programme. I want two more races for him, then the Derby. This is just one stepping stone and we keep building."

The 3-1 chance, produced down the outside in the stretch, scored by three-quarters of a length to record his first success in the US since leaving France. Stablemate Beach Patrol, second past the post, was demoted to fourth for interference.

A dominant performance from 2-1 shot Sharp Azteca (Jorge Navarro/Edgard Zayas), who sat outside Blofeld up front before striding on at halfway and winning eased down by four and half lengths. "This horse has been training like a real horse," said Navarro. "Since the day I bought him I knew I had something special here."

A repeat victory from Bolo (Carla Gaines/Mike Smith) on his first start since July following throat surgery for breathing issues.

FIRST PUBLISHED 11:59AM, FEB 12 2017
I want two more races for him, then the Derby - this is just one stepping stone and we keep building