Kentucky Derby and Dubai World Cup next on Appleby's wishlist 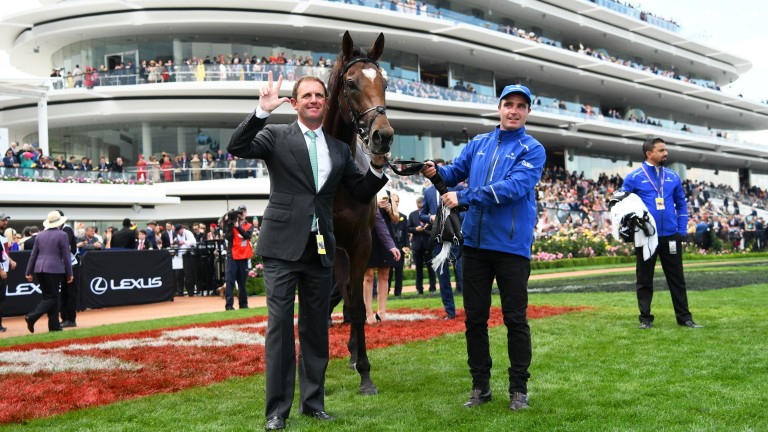 Trainers across the world beware! When Charlie Appleby started training he expressed two ambitions – to win the Derby and the Melbourne Cup – and fresh from realising those dreams the Godolphin man is eyeing Kentucky Derby and Dubai World Cup glory.

In just his sixth season with a licence, Appleby has achieved 12 top-level victories across seven countries, culminating with Cross Counter becoming the first British-trained winner of the Lexus Melbourne Cup at Flemington on Tuesday.

It all started at Meydan in March, where Appleby landed three Group 1 prizes, and the Moulton Paddocks trainer has set his sights on the feature showstopper on Dubai World Cup night.

He said: "My ambition is to keep trying to be successful and do the best we can for Godolphin and His Highness Sheikh Mohammed. Every time we have an international winner there's a sense of achievement.

"On January 1 we start on zero again and and this year we've given ourselves a bit of a bar to maintain, let alone go above.

"The Kentucky Derby is on everyone's lips. It's not been done so that's a target, as is winning a Dubai World Cup. Saeed [Bin Suroor] has won plenty but I'd like to try to get involved if I can so they're high on the agenda now."

Appleby reported a clean bill of health for his Melbourne Cup hero Cross Counter, who paraded at Werribee on Wednesday morning and is set to spend the winter in Dubai before plans for further international escapades are hatched next year.

Appleby said: "He ate up last night and his legs are clean. He's had a pick of grass and taken it well.

"He's a young horse and it was only his eighth run. We'll let the dust settle and form a plan in the new year, but he's a gelded son of Teofilo so racing's going to be his game and he's proven the international stage is for him so I'm hopeful we'll be back next year.

"It was a momentous day and what we've achieved is magical – it's been a stellar year we don't want to finish.

"As an Englishman the pinnacle is the Derby, especially as it had never been won in Godolphin blue. That's always going to go down as the most memorable day of my career.

However to come here and do what we've done just shows the passion and drive His Highness Sheikh Mohammed has – he's been trying to win this race for over 20 years."

Appleby saddled his first two runners in the Melbourne Cup in 2016, with Qewy faring best in fourth, and after watching from afar last year, he reaped the rewards of the initial experience.

He said: "Each year we've learned a bit about what's needed and we felt we had the right horses coming down here. You need a horse who can stay and has got gears – Cross Counter showed a turn of foot in the last two furlongs. You can't bring a dour stayer down here, it's too good a race for that.

"We brought our jumping stayers in the past and we thought we could outstay everybody, but they're too slow. You need a class animal to win a Melbourne Cup and ideally off the right weight. Cross Counter ticked every box going into the race."

'I'm very fortunate to have a great team'

Appleby is as Godolphin as they come. Having started with David Loder 20-odd years ago in the days of Dubai Millennium, who was still known as Yaazer back then, he moved to France before returning for a job with Saeed Bin Suroor.

He moved up the ladder, was given more responsibility in Dubai, and then worked under the disgraced Mahmood Al Zarooni, whose eight-year doping ban gave Appleby the opportunity to take over at Moulton Paddocks.

He understands the organisation better than anyone and, having worked his way up, is just as keen to remember the hard work of those who now occupy the positions he once held.

He brought Chris Connett, who had been overseeing Cross Counter's preparation, and each of his work riders to the Wednesday morning media call and said: "I'm delighted for the team. The guys behind me are the ones that do all of the work and I'm just lucky to have them helping me along. I'm sure they've had a good night and I hope they have a good week. 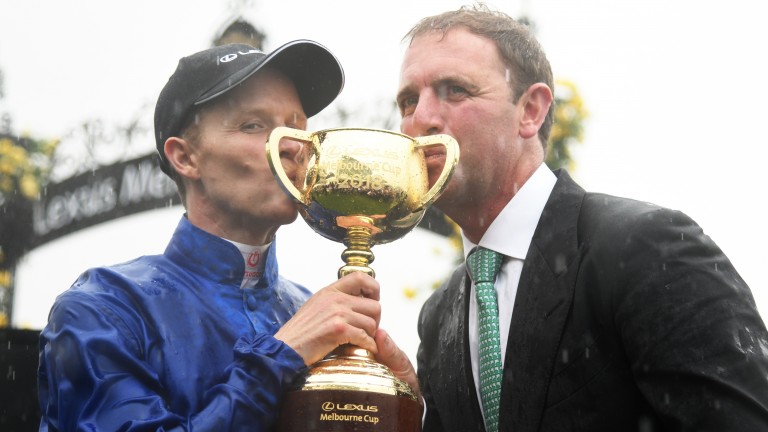 Sealed with a kiss: Charlie Appleby (right) and Kerrin McEvoy, the Melbourne Cup-winning trainer and jockey, savour the moment at Flemington
Vince Caligiuri/Getty Images
"I'm very fortunate to have a great team behind me and this success isn't about me, it's for Godolphin and more importantly His Highness Sheikh Mohammed. We all know what he's done for the industry and there's no-one more deserving."

On that team he added: "I've been part of Godolphin 20 years now – it's been my life. I know what it lives and breathes for. I'm very fortunate that I've always got on with His Highness Sheikh Mohammed and I know what makes the machine tick so I've got the right team and have worked with so many of them for so long.

"I can't travel around the world seeing every horse and training them on a day-to-day basis, it's impossible, so I rely on the team back at home and those overseas. We talk the same language and it gives me the confidence. We have all the technology in this day and age and I have confidence in Chris."

Bowman hit with 35-meeting ban after rules breaches on Marmelo

Three things we learned from a Melbourne Cup dominated by Brits

FIRST PUBLISHED 5:22PM, NOV 7 2018
Saeed has won plenty but I'd like to try and get involved if I can so they're high on the agenda now