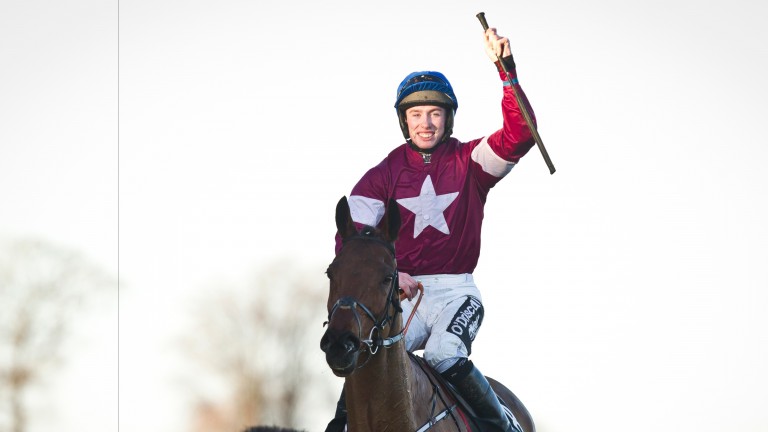 Jack Kennedy: his mount Ball D'Arc has been favourite since betting opened on the race
Patrick McCann
1 of 1
By David Jennings 6:00PM, JAN 14 2017

Jack Kennedy has looked born for the big stage of late. Seven days ago he guided Death Duty to Grade 1 glory at Naas, his second top-level success in the space of a fortnight, and on Sunday the 17-year-old will be on board Ball D'Arc in this lucrative handicap chase.

The six-year-old has been favourite since betting opened on the race this week. He was also favourite for a similar contest at Leopardstown over Christmas when he was third behind Lake Takapuna, but it must be noted that he was badly hampered by the final-fence fall of Powersbomb and didn't get much luck up the run-in either.

Victory for Ball D'Arc would extend Gordon Elliott's lead at the top of the Irish trainers' championship and he also has decent back-up with Turn Over Sivola, who was a useful performer earlier in his career for Alan King but has yet to fire since arriving in Ireland.

Defending champion Willie Mullins, who won the race in 2014 with Turban, is represented by Jarry D'Honneur. He was two places behind Ball D'Arc at Leopardstown but is expected to fare better this time provided he consents to settle.

Surely there would be no more deserving winner than Pairofbrowneyes, who has had a string of placed efforts and looked sure to score at both Cheltenham's Open meeting and in the Tim Duggan at Limerick only to be collared on the run-in in both races.

This is topweight Days Hotel's third appearance in this race. He was third to Mallowney in 2015 and fifth last year behind Nearly Nama'd.

Neil Mulholland, trainer of Baltimore Rock
I was very happy with his comeback run. He was running a big race until he got badly hampered in the home straight. He has come out of the race well and hopefully he'll improve for his first outing.

Willie Mullins, trainer of Jarry D'Honneur
He ran far better at Leopardstown than both his finishing position and the distance he was beaten suggest. Although he made his comeback at Fairyhouse at the start of December, I thought he looked like he still needed the race at Leopardstown. He was very free there and Robbie [Power] had a job on his hands to keep a hold of him. I'm hoping that will have taken the fizz out of him and he could have a big pot in him. Hopefully that's today.

Barry Murphy, trainer of Pairofbrowneyes
He has just got chinned the last twice and on both occasions he probably found himself in front a bit too soon. He worked really well the other morning and we're quite confident. He had a hard race at Limerick but he seems to have come out of it well. I think 2m1f is his optimum trip.

John Ryan, trainer of Draycott Place
He's in tremendous form. I couldn't be any happier with him. This has been the plan for a while and that was why we gave him a spin over hurdles last time. I'm expecting a huge run from him.