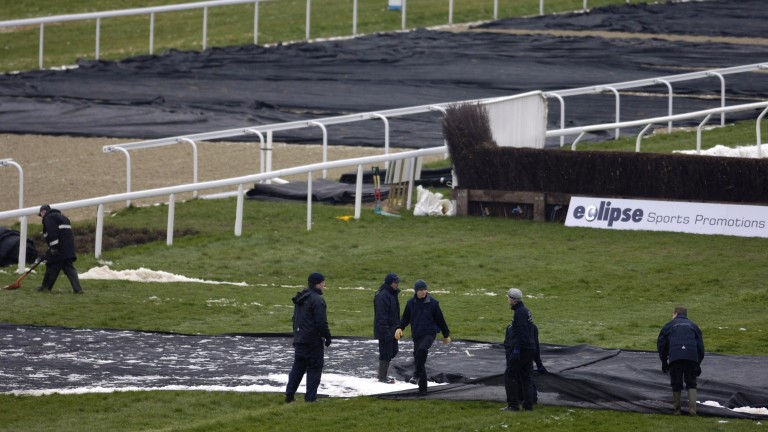 Frost covers are being deployed at Kempton and Warwick ahead of Saturday's meetings
Edward Whitaker
1 of 1
By Scott Burton 7:17PM, JAN 12 2017

While the north of England braces itself for gale force winds and the south could be facing icy conditions before the week is out, officials at Saturday's two most high-profile meetings have issued upbeat prospects for racing.

Kempton hosts the 32Red Lanzarote Hurdle and clerk of the course Barney Clifford – a self-confessed optimist – was positive about the forecast on Wednesday afternoon.

"We're deploying frost covers from Thursday as there's a band of wet, wintry sleet or snow coming through in the evening, which could settle," said Clifford.

"I think you're looking at eight or ten millimetres of precipitation and then we'll be awaiting the two frosts which are forecast going into Friday and Saturday. We should be fine providing we don't have enormous accumulations of snow."

The other cornerstone of ITV4's scheduled coverage at Warwick is set to feature both the Betfred Classic Chase and the Grade 2 Neptune Investments Novice Hurdle.

"We're halfway through putting the covers down as of now," said clerk of the course Jane Hedley on Wednesday afternoon.

"We're on the northern edge of the weather front which passes through on Thursday and it's looking increasingly likely that we could catch some of it. Beyond that, it clears and the temperature dips but if the forecast is correct the covers will do their job and we're not concerned."

FIRST PUBLISHED 5:56PM, JAN 11 2017
We're deploying frost covers from Thursday as there's a band of wet, wintry sleet or snow coming through in the evening, which could settle