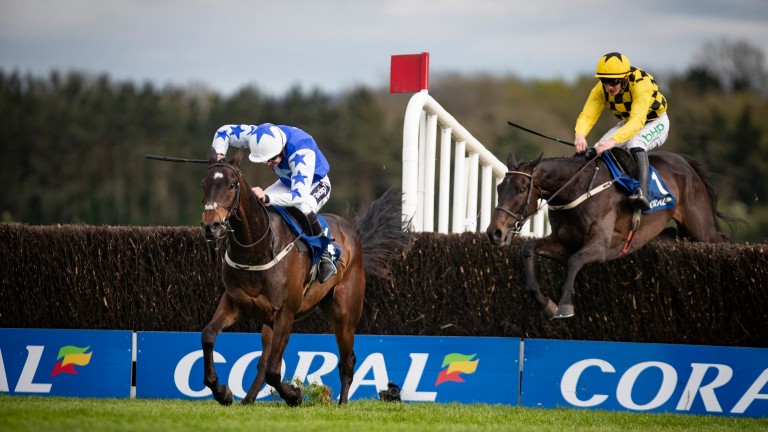 Ruby Walsh: drives Kemboy to success in the Punchestown Gold Cup
Patrick McCann
1 of 1
By Tony O'Hehir UPDATED 8:36PM, MAY 1 2019

A wave to the crowd by Ruby Walsh as Kemboy passed the post first in the Coral Punchestown Gold Cup was the first signal. And minutes later it was confirmed - the outstanding jump jockey of the era had ridden his last winner in his last race.

Walsh announced his retirement after 24 years as a rider, 12 Irish jockeys championships, a record 59 winners at the Cheltenham Festival. two victories in the Aintree Grand National and three Irish Grand National wins.

Kemboy's success was Walsh's sixth win in the race, making him the outright leading rider in the history of the event.

The Betway Bowl winner led home a 1-2 for Willie Mullins in a thrilling renewal of the Grade 1 event, beating the Cheltenham Gold Cup winner Al Boum Photo by two lengths.

Mullins, who described Walsh's retirement as "the end of an era ", said: "Ruby has been a fantastic stable jockey, a huge help to me and a great friend. I hope he will continue to be involved with the yard."

Commenting on Kemboy's performance, Mullins said: "He was up there all the way and Definitly Red put it up to him for a long way. When Al Boum Photo tackled him, Kemboy kept finding more.

"I'm delighted for his owners the Supreme Horse Racing Club. They've been with me for many years and are a fantastic group. We've had our ups and downs but they really enjoy their racing and it's brilliant that Kemboy has won three Grade 1s for them this season."

The Supreme Horse Racing Club-owned runner, who was landing a third Grade 1 of the season for connections, was joined for the lead by Definitly Red and the duo certainly set a good pace throughout.

Walsh said: "He jumped really well and I knew Definitly Red would make it a real race and it was that. Paul(Townend on Al Boum Photo) got up to me on the bend and I thought it was going to be a real race but this little horse quickened."

Al Boum Photo, who gave Mullins his first success in the Gold Cup at Cheltenham, travelled well on the whole but was not helped by a few small jumping errors. "Al Boum Photo would probably have preferred slower ground and Paul said that he didn't travel as well as he did at Cheltenham, "Mullins said.

Paddy Power cut Kemboy to 5-1 (from 8) for next year's Cheltenham Gold Cup, while Al Boum Photo was unchanged at 8-1 with Betway.

A race that certainly lived up to its billing as a match between the Mullins-trained pair provided an aftermath most racegoers were not expecting. The end of the line for a true legend of the sport.

FIRST PUBLISHED 6:20PM, MAY 1 2019
Paul got up to me on the bend and I thought it was going to be a real race but this little horse quickened