News RACE TO BE CHAMPION 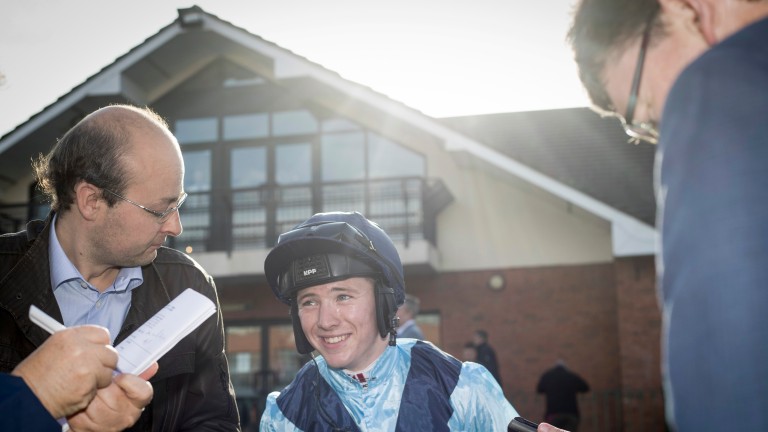 Champion-elect: Colin Keane is as short as 1-20 after extending his lead to seven over Pat Smullen
Patrick McCann
1 of 1
By Brian Sheerin 5:07PM, OCT 18 2017

Colin Keane may be 1-20 to cap his sensational campaign by being crowned champion jockey but the 23-year-old will not be lulled into a false sense of security by Pat Smullen's declaration that the race is over.

Heading for Dundalk last Friday, Keane led the nine-time champion by three. A winner there, two at Cork on Saturday and three at Naas on Sunday saw him extend his lead to seven.

That prompted Smullen to publicly concede defeat. The 40-year-old title holder is due to miss this Saturday's Fairyhouse fixture to ride Eziyra at Ascot and is also likely to sit out Saturday week's Leopardstown card after picking up a one-day careless riding ban at Cork last weekend.

As such, with nine meetings left before the curtain comes down, Smullen might ride only at seven, and he was pushed out to 8-1 by Paddy Power on Sunday evening having been 5-6 with the firm on Friday morning.

Keane, who is now on the 90-winner mark and just one shy of a calendar-year century, insists he has been in the game long enough to know there is no such thing as a certainty in racing.

"I said a few weeks back that I had set my sights set on riding 100 winners this season and that remains the aim," the 2014 champion apprentice said on Monday.

"It will be hard, but that's what I'll be trying to do, because I know Pat well and he won't be going down that easy.

"Pat had a wonderful evening at Dundalk not so long ago when he rode four winners, and if he were to have a day like that again, suddenly he's back in contention. It's my job to keep riding winners and make it difficult for him."

Of the prospect of reaching the promised land, he was quick to pay tribute to his boss Ger Lyons, whose horses have been in top order.

“To win a first title would be great but I wouldn’t be in this position without Ger," said Keane. "He’s had his horses in great form all season and I’ve really enjoyed the year.”

“I think it will be very difficult for Pat at this stage," the trainer said on Monday.

“Pat and Colin are terrific riders and the number of finishes they've fought out has been terrific."

Of his Ascot foray this weekend, Weld added: “Eziyra is more than likely going to take her chance in the Fillies & Mares. She won a Group 3 as a two-year-old and is a filly we've always liked.

"She's had a good season, finishing third behind Enable in the Irish Oaks, and she's won back-to-back Group 3s, her most recent win coming in the Enterprise Stakes at Leopardstown.

"I'm very happy with her, and the plan is to run, but we'll make a definite decision later in the week. We've been very lucky on British Champions Day down the years."

Eziyra is a 9-1 shot to secure her first Group 1 success in a race that Weld and Smullen won with Sapphire when it was run as a Group 2 in 2012.

Before then, the next part of the Keane-Smullen joust will take place at Dundalk on Friday night.