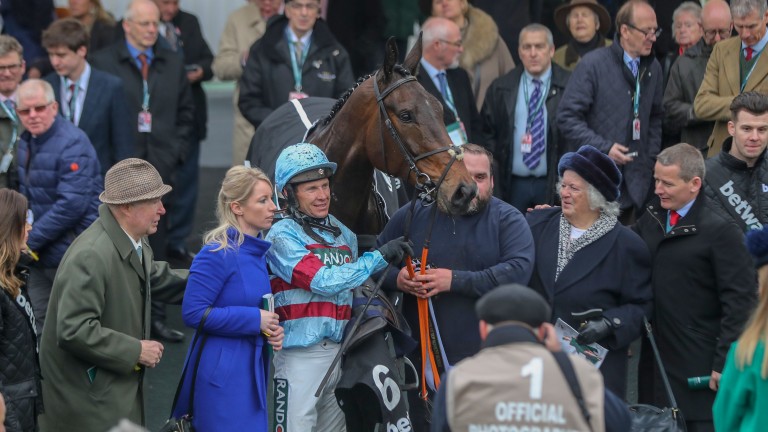 Not one of the five runners can be discounted in a stellar renewal of the Racing Post Arkle Trophy Trial, although there will be a significant poignancy should Lalor prove successful for Kayley Woollacott on his first start over fences.

It was an emotional day for Woollacott at Aintree in April when the David Staddon-owned Lalor landed the Top Novices’ Hurdle, three months after the death of her husband Richard, and the horse he adored has all the makings of a high-quality chaser.

The prolonged dry weather has forced Woollacott to start the six-year-old off over fences at Cheltenham and all roads lead to the spring festivals.

Woollacott said: “It would have been nice to have run him before going into this but the weather prevented us from doing so. We’ve been very pleased with his schooling and hope he has a nice first experience.

“He’s probably a spring horse so everything is geared towards then. It would be amazing if he were to win and it would be a great start, but we’re keeping our feet firmly on the ground.”

The second of three exciting chase debutants is Defi Du Seuil, with the 2017 Triumph Hurdle winner returning to action for the first time since February.

The JP McManus-owned five-year-old was a three-time winner at the top level over hurdles and trainer Philip Hobbs has been pleased with his preparation.

Hobbs said: “He seems very well and has pleased us with his schooling.

“We’re looking forward to running him – it’s a typically competitive renewal, which is what you expect when going to Cheltenham – and we’re hoping the ground doesn't dry out too much.”

Claimantakinforgan has the benefit of experience following a straightforward victory on his debut over fences at Uttoxeter at the start of the month.

The Mike Grech and Stuart Parkin-owned six-year-old enjoyed a progressive last campaign over hurdles, culminating in finishing second in the Scottish Champion Hurdle, and conditions should suit.

Trainer Nicky Henderson said: “I was pleased with him last time and he got some good experience there.

“The decent ground is going to be fine for him and he seems in good form, but this is a hot race."

Paul Nicholls has won six of the last ten renewals, with Al Ferof and Dodging Bullets among those on the honour roll, and aims to enhance his recent record with Dynamite Dollars, who was an impressive winner on his chase debut at Market Rasen last month.

Nicholls said: “He won nicely at Market Rasen and the runner-up Highway One O One has since defeated one of ours so the form has been boosted.

“This will be his toughest task yet but he’s a good, solid horse.”

Optimism is high in the Tizzard camp for the other chase debutant Pingshou, who missed last season with a tendon injury but previously scored at the highest level in the Top Novices’ Hurdle at Aintree in 2017.

Joe Tizzard, son and assistant to father Colin, said: “We can't wait to run him. He’s been back in since the beginning of July and has schooled really well.

“He’s entitled to improve for the run but he’s a class horse and we're looking forward to going chasing.

“We know he has the ability to be a festival horse but he has to get the experience around Cheltenham.”

Watch Pingshou win at Aintree in 2017

FIRST PUBLISHED 6:00PM, NOV 17 2018
He?s probably a spring horse so everything is geared towards then for him