The four-year-old rallied to finish second at Musselburgh over a mile seven days ago but relished the drop back to 7f to provide Scott with a third winner of the season.

Scott, who trains in the Scottish Borders, said: "It’s good to get a win on the board – he’s been so consistent.

"The plan is to aim him at the new Sunday Series that they are setting up. There’s a seven-furlong race at Musselburgh on the July 25.

"Obviously it will be more competitive but when they’re putting that sort of prize-money on, I think it’s good to go and have a shot."

Michael Dods and Connor Beasley enjoyed a 55-1 double with both winners benefiting from softer ground than recent outings.

John Kirkup just edged out the Alan Berry-trained Economic Crisis in a photo-finish in the concluding 5f handicap.

This followed 14-1 outsider Vaccine, who bolted up to win hard held in the opening 7f novice stakes.

The two-year-old displayed significant improvement than when finishing last of eight on debut at the track last month when ridden by Paul Mulrennan. 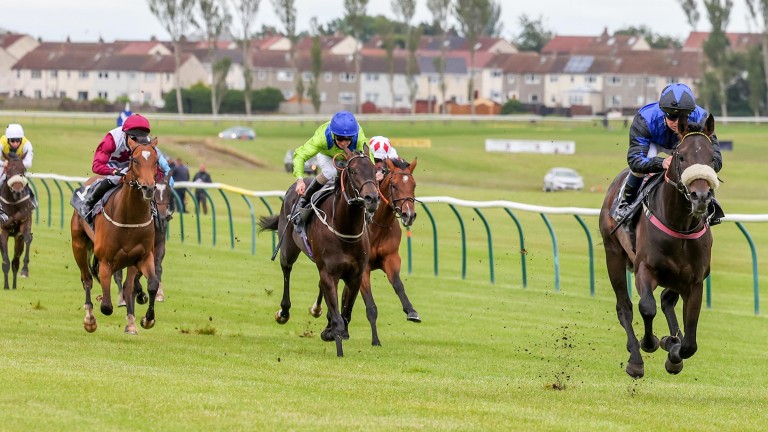 Mulrennan was to have a better day this time round as he landed a quickfire double in both divisions of the 6f handicap.

The jockey teamed up with the in-form Jim Goldie to steer 2-1 favourite Oriental Lilly to a first win in 20 starts since success at the track last July.

FIRST PUBLISHED 6:56PM, JUL 5 2021
when they’re putting that sort of prize money on, I think it’s good to go and have a shot