Karar to be Graffard's first runner but Erupt heads to Japan 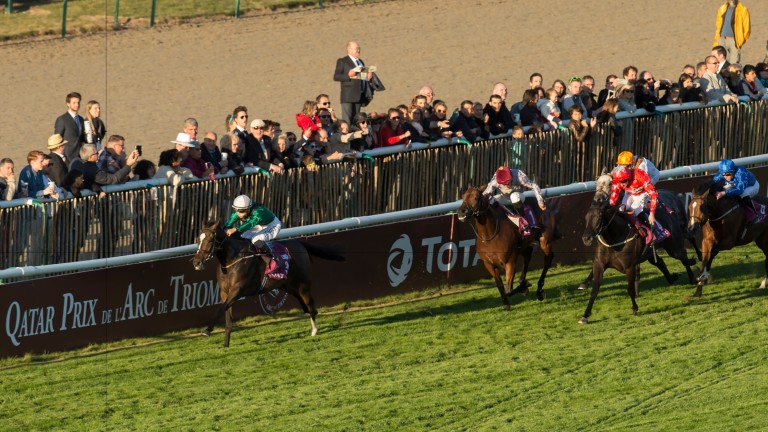 Karar (maroon cap on the rail) will be a first Breeders' Cup runner for trainer Francis Graffard
Edward Whitaker
1 of 1
By Scott Burton 1:46PM, NOV 1 2016

Francis Graffard is looking forward to Karar becoming his first Breeders’ Cup runner on Saturday and is favouring the Turf Sprint over the Mile.

Stablemate Erupt was not on the flight to Calfornia after Graffard and owners the Niarchos family elected to give him more time to recover from his exertions after landing the Canadian International.

But Graffard has Al Shaqab's Karar to look forward to and said on Sunday: "I'm delighted to be going and he's arrived safely. He is in top form and loves fast ground and a decent pace. I think he'll run in the Turf Sprint and I have every confidence in him."

Karar finished second to Limato over seven furlongs in the Prix de la Foret and will avoid a rematch with Henry Candy’s stable star, who is being aimed at the Mile.

Erupt will return to Tokyo for a second crack at the Japan Cup on November 27, having finished sixth last year.

Graffard said: "We took the decision quite close to when he would have departed for the US and he's now being prepared for the Japan Cup. He's in great shape, I'm very happy with him, and we know what to expect there."

The Niarchos colours will still be represented at the Breeders’ Cup by the Sir Michael Stoute-trained Ulysses, a best-priced 10-1 chance for the Turf.

The Classic, however, has lost one of its box-office names, with Doug O’Neill ruling out Nyquist after the Kentucky Derby winner was found to be suffering from a "puffy ankle."

FIRST PUBLISHED 4:59PM, OCT 30 2016
I think he will run in the Turf Sprint, which is 1,300 metres with a turn and I think the speed of a race like that will suit him. I am quite confident in the horse who goes there in top form