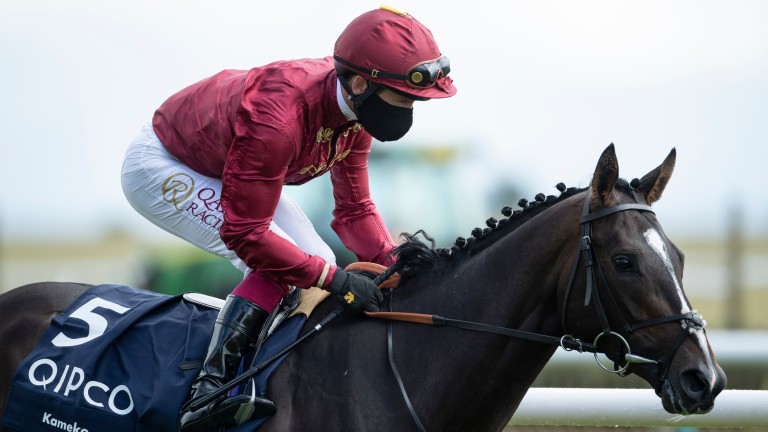 Kameko, the 2,000 Guineas hero who had been a leading contender for the Queen Elizabeth II Stakes at Ascot on Saturday, will not run in the Qipco-sponsored event, connections outlined on Wednesday.

Trained by Andrew Balding for Qatar Racing Limited, whose founders are involved in the backing of Champions Day, Kameko will not line up because of the ground, but is due to head to the US for next month's Breeders' Cup meeting at Keeneland.

His team had warned testing conditions at Ascot may jeopardise his participation and confirmation of that came on Wednesday, when the ground was described as soft, heavy in places by clerk of the course Chris Stickels.

KAMEKO will not run in the QEII on QIPCO British #ChampionsDay due to the ground and will be targeted at the @BreedersCup pic.twitter.com/JxtAuFWbSL

The forecast for the next few days is generally dry, but that has not been enough to tempt the Kameko camp, who are now set to target the Breeders' Cup Mile at Keeneland on November 7.

And his absence has seen the unbeaten Palace Pier firm up as favourite for the QEII, with the St James's Palace Stakes and Prix Jacques le Marois winner no bigger than 8-13 for what is widely regarded as one of the most important mile races in the world.

David Redvers, racing manager to owners Qatar Racing, said: "Having spoken to Chris Stickels at lunchtime he said the ground at Ascot is soft, heavy in places and only a shower away from being heavy, soft in places.

"In that regard we didn’t want to risk a good-actioned horse like Kameko on Saturday. We would prefer to tackle Palace Pier at the Breeders' Cup, where we are considering running him in the mile.“

With Kameko out, Palace Pier is 8-13 (from 4-6) with Coral, who make French raider The Revenant their 9-2 second favourite.

The Francis-Henri Graffard-trained five-year-old returned to action with a smooth win in the Prix Daniel Wildenstein at Longchamp on Arc weekend and boasts strong course form, finishing second behind King Of Change in last year's QEII on heavy ground.

He is followed in the market by two-time Royal Ascot winner Circus Maximus and Sun Chariot scorer Nazeef.

Coral's David Stevens said: "Connections of Kameko had warned earlier this week that the Guineas winner may not line up at Ascot on soft ground, and, as a result, Palace Pier had already been backed into 4-6 favourite for the Queen Elizabeth II Stakes, and with his major rival now a confirmed absentee, the latter is 8-13 to maintain his unbeaten record."

A son of Kitten's Joy – the sire of Qatar Racing's former star Roaring Lion, who won the Queen Elizabeth II Stakes two years ago – Kameko was impressive in his Guineas triumph in June, but finished only fourth in the Derby, Sussex Stakes and York's International Stakes on his next three outings.

However, he got right back on track with a commanding win in the Joel Stakes at Newmarket recently.

He is 5-1 with Coral for the Breeders' Cup Mile.

The other major news of the day came at Bath when Prince Faisal's retained rider David Egan confirmed he would not be aboard the John Gosden-trained Champion Stakes second favourite Mishriff on Saturday, with Frankie Dettori taking the ride instead.

Egan rode the son of Make Believe in the Saudi Derby and Newmarket Stakes, but Ioritz Mendizabal was aboard in the Group 1 Prix du Jockey Club when quarantine rules prohibited Egan from taking the ride.

Dettori rode the three-year-old colt to win the Prix Guillaume d'Ornano last time out when a five-day ban, picked up at Glorious Goodwood, ruled Egan out of the Deauville Group 2 - and Egan revealed he will again miss out.

Speaking to Sky Sports Racing at Bath, he said: "Prince Faisal has decided to use Frankie Dettori this time. He won on him the last day when I wasn't able to ride due to suspension. Hopefully I'll have another good day on him sometime.

"It's part of racing, but the Prince has been very good to me when I finished second on him in Saudi Arabia and when I won a nice race on him at Newmarket.

"It's been a good connection with the Prince and I'm still retained by him, it's just on this occasion he's decided to use Frankie and I respect his decision. If he wants the best in the business I can't complain to myself."