Talk Of The Tracks LUDLOW MONDAY

Just what the Dr ordered as Nicholls bags landmark 3,000th winner in Britain 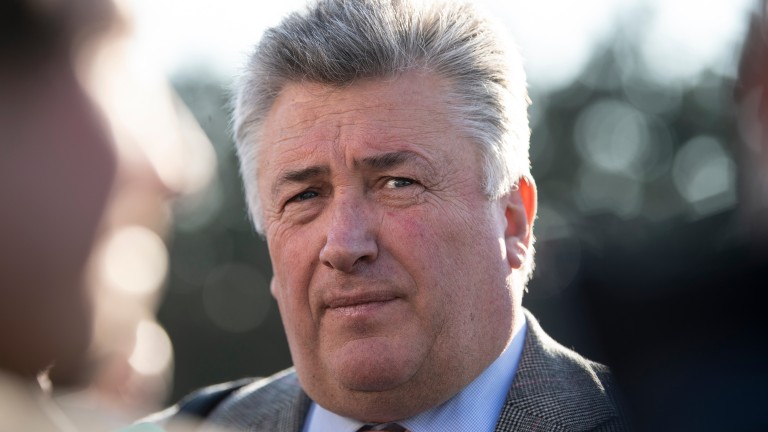 With an 11th championship on the horizon, Paul Nicholls reached another major landmark in his remarkable training career when the victory of Dr Sanderson in the 2m5f novice hurdle proved to be his 3,000th winner under both codes in Britain.

Although Dr Sanderson was opposed out to 9-4 second favourite he was always travelling smoothly under amateur rider Bryan Carver before taking over at the fourth last hurdle and holding too many aces for Rapper.

Speaking from his Manor Farm Stables base, a jubilant Nicholls said: ”When I started training back in 1991 it was the stuff that dreams are made of that we could be celebrating 3,000 winners or anything approaching that figure in 28 years as it was proper hard work for a few seasons.

“Where we are now is down to a great team of owners and very good staff, who can be relied upon to get the job done as I cannot be everywhere at once. Delegating has always been an important aspect of the way we all go about the business at home and it’s important in our success," he added.

Nicholls has now trained 2,989 domestic winners over jumps and a further 11 on the Flat and he added: “Obviously the real cause for celebration will be our 3,000th jumps winner in Britain and I would be hopeful we can get the job done before the end of the term as long as the ground is fine.

“We have very important days later this week at Aintree and after that there are decent meetings at Ayr and Cheltenham before the season signs off at Sandown towards the end of the month. All in all, I could not be more happy with where we are at the moment and then it’s a case of looking forward to next autumn.”

Evan Williams is always a trainer to be respected at the Shropshire circuit and he posted his 50 for the season after Court Royale took the 2m handicap hurdle and added to that tally when Burn Baby Byrne came from off the pace to take the 2m5f mares’ handicap hurdle.

The trainer said: “We always like to get 50 in the bag for the year and Court Royale took advantage of a little drop in class even though it looked quite a deep race on paper. The key to him is a fast pace and decent ground – he got both out there.”

Of Burn Baby Byrne, who was partnered by his daughter Isabel, Williams added: “The mare is a tricky ride as she has to be dropped right out and brought with a late run. She made a mistake and Isabel did well to sit but after that it was a bit more straightforward.”

Kim Bailey and jockey David Bass had a 28 percent strike rate when teaming up at Ludlow and added to those impressive statistics after Cresswell Legend proved the answer to the 3m handicap chase before following up with Rose To Fame in the finale.

Blast from the past

Former Channel 4 racing commentator Graham Goode was at the track as part of the Million In Mind Partnership, who cheered home Dr Sanderson in their colours to readily land the opener.

Owner Janet Davies was on hand to see Court Royale carry her colours to victory in the 2m handicap hurdle. The six-year-old proved to be her 25th at the course.

Thought for the day
Tom George declared that Valseur Du Granval’s victory at Ludlow was very important as the winner is owned by Dave Thompson, who just happens to be the trainer’s secretary at his yard near Stroud in Gloucestershire.

FIRST PUBLISHED 6:47PM, APR 1 2019
When I started training back in 1991 it was the stuff that dreams are made of that we could be celebrating 3,000 winners or anything approaching that

'He's better than that' - Paul Kealy fancies a Somerset National outsider 'There is no better feeling' - relentless Stag Horn delights Scholfield 'It was a very cool ride' - James Bowen lands another Grand National triumph 'I've had this race in mind' - who has been laid out for the Lanzarote Hurdle? Training titans put records on line against Haldon Gold Cup king Eldorado Allen 'Wonderfully tough' Frodon to spearhead Paul Nicholls' bold Leopardstown raid