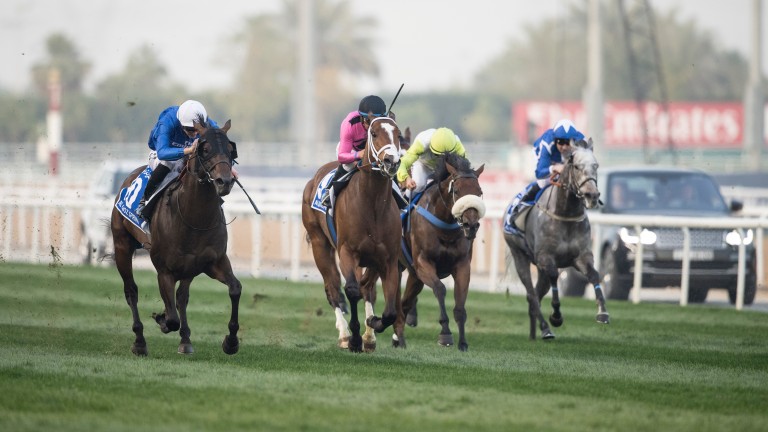 The highs and lows of horseracing are what make this sport so special and unpredictable. Just ask Charlie Appleby.

The Godolphin trainer was left flabbergasted when short-price favourite Blue Point was scratched from the Al Quoz Sprint less than 60 seconds before the off after the vet found blood in the horse’s nostril at the start.

Appleby, with tears in his eyes, said: “I'm delighted. I don't know what's happened to Blue Point down there, but I knew Jungle Cat was in the form of his life. The team have done a fantastic job and he deserved to win a race like this.

"I fancied him for this last year but when the rain came his chance was gone, but he's a Group 1 winner now and I'm so proud of him.

“The carnival has gone so well and, not that there's any pressure going into this, I’m just very relieved to put one on the board myself. It's a great team effort and I'm delighted for Godolphin and His Highness Sheikh Mohammed.”

In-form jockey James Doyle was also enjoying his first winner for Godolphin on World Cup night, having previously been successful aboard the Khalid Abdullah-owned Cityscape in what is now the Dubai Turf in 2012.

Doyle said: “Jungle Cat's attitude towards life is fantastic. In the mornings he doesn’t really show up – if you watched him you’d be scratching your head a lot – but that’s why he’s lasted so long as he keeps it back for the big day.

“I was gutted for Will [Buick] as I know how much he was looking forward to riding Blue Point, but the race panned out nicely for Jungle Cat and, although he got to the front and shut down a bit, I was never really concerned."

Doyle enjoyed a Good Friday double for William Haggas on finals day at Lingfield and the swift climate switch was not lost on him.

He said: “It’s a bit of a drastic change. It was 4C and chucking it down yesterday. Now I’m sweating buckets.”

Buick was understandably disappointed to miss out on riding Blue Point but delighted for his colleague and good friend Doyle.

He said: “Blue Point was really relaxed and everything went as we would have hoped for, but the vet just noticed a trickle of blood from his nose and he couldn’t run after that so was scratched.

"It was great James won and as soon as Blue Point was out I was cheering for Jungle Cat. It's gutting for myself, but at least we won with the other horse."

It looked like Stormy Liberal, a 40-1 winner of the Breeders’ Cup Turf Sprint last year, would run down Jungle Cat late on but rider Joel Rosario felt a little company on the far side would have helped the Rockingham Ranch and David Bernsen-owned sprinter.

Rosario said: “I thought he was going to be able get past Jungle Cat with half a furlong to run but he was just too tough to pass.

“He wanted a little company late on but he’s ran well nonetheless.”

FIRST PUBLISHED 3:16PM, MAR 31 2018
I fancied him for this last year but when the rain came his chance was gone, but he's a Group 1 winner now and I'm so proud of him

'He's a horse we like a lot' - Roger Varian could hold key to big-field handicap 'Challenging horse' Kemari solves his trickiness puzzle with impressive success Mohaafeth bidding for redemption for William Haggas after late Derby withdrawal Can one-of-a-kind Jim Bolger pull off more Group 1 heroics with Poetic Flare? One trainer, one jockey, one horse and one race to note on Royal Ascot day one 'It's been a great week' - Charlie Appleby's amazing run of success continues