JP McManus: why Istabraq's win meant so much 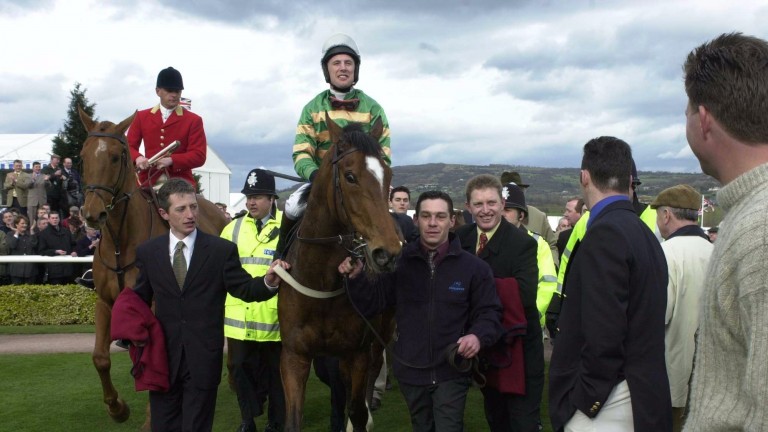 Charlie Swan and Istabraq are led in after winning the Champion Hurdle at Cheltenham in 2000
JOHN GROSSICK
1 of 1
UPDATED 3:26PM, NOV 22 2019

Mister Donovan (1982) Mister Donovan winning the SunAlliance Novices' Hurdle, under Tommy Ryan, in 1982 was very special, not only because he won but because I badly needed it at the time. I'd had a disastrous first day at the festival and he got me out of all sorts of trouble which was reflected in his price. He was my first festival winner and while we've been lucky to have had another 31 winners at the meeting, all of them memorable in their own way, your first is always special.

Istabraq (1997, 1998, 1999, 2000) Istabraq won four times at the festival and his novice win and his three consecutive Champion Hurdle victories are all treasured. There was so much emotion involved with the horse especially because of the late John Durkan's illness. John played such a major part in the Istabraq story. I would never have owned the horse but for him and whenever I think of Istabraq I always think of, and remember, John.

Time For A Run (1994) Time For A Run's win in the 1994 Coral Cup was special because he was a home-bred. We also bred So Proud, who finished second in the same race, so it was a great result for everyone at Martinstown. I went on to share in a double with Edward O'Grady and Charlie Swan later that day when Mucklemeg won the bumper.

Binocular (2010) After all the success we enjoyed with Istabraq, it was great to win another Champion Hurdle last year when Binocular won for Nicky Henderson and AP. Mention of AP also brings to mind his never-to-be-forgotten ride on Wichita Lineman in the William Hill Trophy Handicap Chase at the 2009 festival when he forced the horse up close home to win by a neck for Jonjo O'Neill and the Jackdaws Castle team.

Elegant Lord (1996) Trying to pick out five special memories is no easy task as every festival winner you're lucky enough to be involved with is a story in itself. But Elegant Lord winning the 1996 Christie's Foxhunter Chase was memorable as he was trained and ridden by Enda Bolger from our own locality. It was a Cheltenham first for Enda, who is someone I'm very close to. I'd also like to mention Like-A-Butterfly, whom Christy Roche trained to win the Supreme Novices' Hurdle in 2002. She won on the day Istabraq ran his final race and all of my family had a particular interest in her.

FIRST PUBLISHED 7:00AM, FEB 27 2018
There was so much emotion involved with the horse especially because of the late John Durkan's illness

Richard Johnson: 'It was hard to stomach losing the ride - a bit of a shock' 'It's tempting' - O'Brien considering John Durkan for Fakir D'Oudairies 'I was riding every fence for Trevor' - tears are shed on a magical afternoon 'It's the ability he has' - impressive Ahoy Senor excites emotional Russell Killer Clown could have the last laugh for Emma Lavelle against McManus trio