Dashing Josses hits back of the net for owner Spence 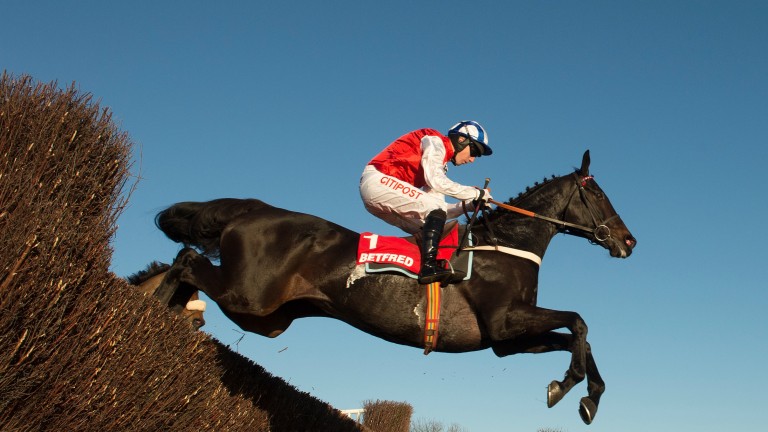 Josses Hill completed the perfect sporting weekend for owner Alan Spence as the chaser with film-star good looks followed the script to justify favouritism in Huntingdon's feature race of the year.

A lifelong supporter and vice-president of his beloved Chelsea Football Club, Spence was already in good voice after his team beat fellow title contenders Manchester City on Saturday and Josses Hill did nothing to dampen enthusiasm as he bagged some early season silverware for the trophy cabinet.

"If we're still top of the league in April and have won a few more races like this, I'll be a happy man," said Spence.

There has never been any doubt about Josses Hill ability, he was runner-up in a Supreme Novices' Hurdle and third in an Arkle, but his jumping has not always looked bombproof.

However, not dissimilar to Chelsea striker Diego Costa, his form this season has been exemplary and he looked a safe proposition in the hands of Noel Fehily.

"He's impressive looking and now his jumping is starting to look impressive," said Spence. "He's getting the confidence and doing it nicely. It's just a case of where we go next. The objective as it stands is the Ryanair Chase; we haven't thought of anything bigger!

"He's been placed at two festivals so we know he likes Cheltenham. But the way he finished his last two races this season makes you think he might get a bit further."

Trainer Nicky Henderson, winning the race for the fifth time, was singing from the same hymn sheet with a step up in trip also in his mind.

"He's getting it together now," said Henderson. "Everything was in his favour – two and a half miles is probably his trip. Good ground is crucial and right-handed probably helped.

"I'd be keen to try him over a little further to see how far he would get. Where? I don't know, but we might edge up. He's not in the King George and won't be running. The 2m5f Grade 1 at Ascot [Betfair Ascot Chase on February 18] is the obvious race but the ground is crucial. He's on the up again now which is great."

Paddy Power cut the winner to 8-1 (from 20) for the Ryanair, a race he finished eighth in last year.

Connections of runner-up for Tea For Two were delighted with his run and the 32Red King George VI Chase at Kempton on December 26 is now the firm target.

FIRST PUBLISHED 2:23PM, DEC 4 2016
If we're still top of the league in April and have won a few more races like this. I'll be a happy man