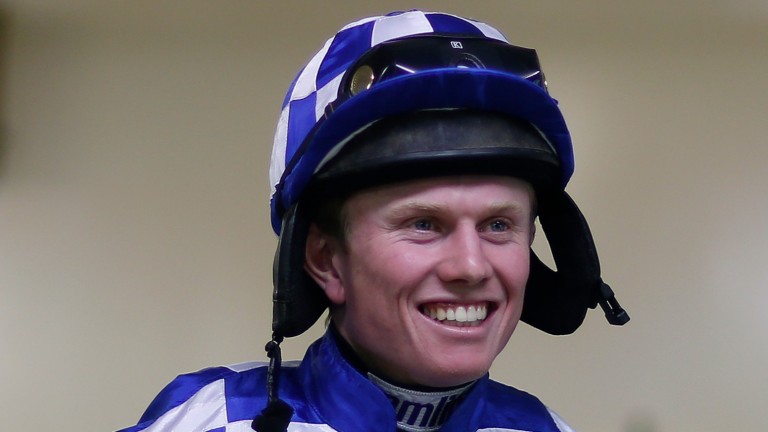 Josh Moore: facing a few months on the sidelines after getting injured at Huntingdon
Alan Crowhurst
1 of 1
By David Milnes 4:35PM, JAN 2 2017

Josh Moore will miss the ride on Ar Mad in the Clarence House Chase at Ascot later this month after a fall at Huntingdon on Boxing Day left him with a dislocated shoulder.

The 25-year-old was injured when his mount, 20-1 chance Torhousemuir, failed to negotiate the seventh in a novice hurdle at the Cambridgeshire track.

Moore, who was stood down by the doctor after his fall, is facing a couple of months on the sidelines after subsequently seeing a shoulder specialist.

His father Gary said: "Josh has a serious enough injury and will be out for a good while I would imagine.

"He dislocated his shoulder in the fall and has his arm in a harness which the specialist said would help him recover. It's certainly not the way he wants to be starting the New Year but hopefully he won't be out for too long.

"The immediate plan would be for Jamie [Moore, brother] to ride Ar Mad at Ascot where we are aiming to run him in the Clarence House on January 21."

Moore, who broke his collarbone when Sire De Grugy fell in the Melling Chase at Aintree in 2015, celebrated his biggest win to date when Ar Mad won the Grade 1 Henry VIII Chase at Sandown later the same year.

FIRST PUBLISHED 4:26PM, JAN 2 2017
It's certainly not the way he wants to be starting the New Year but hopefully he won't be out for too long. The immediate plan would be for his brother Jamie to ride Ar Mad at Ascot