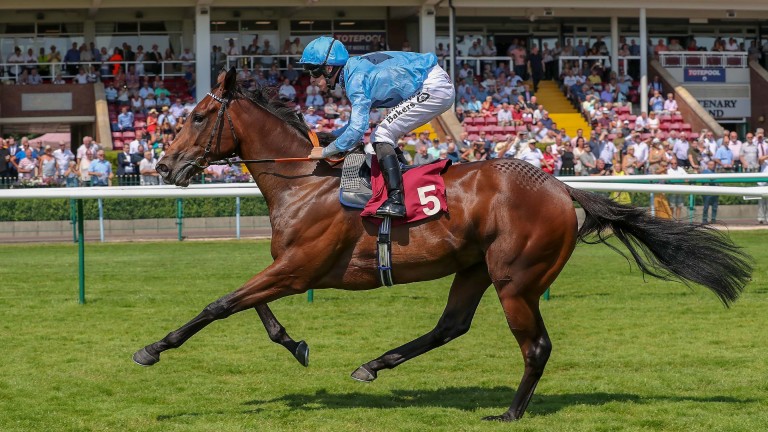 Jonah Jones: one of two four-year-olds in this contest
John Grossick (racingpost.com/photos)
1 of 1
By Keith Melrose and Graham Dench 6:00PM, JUL 25 2020

This race might not have the clout of a Stewards' Cup or Wokingham, it does not even have heritage handicap status, but its record in producing future Group-class sprinters is hardly any less impressive.

In the 2010s, wins in this race presaged the successful careers of Hoof It, Tropics, Muthmir and Kimbrella as well as being win number one in Dakota Gold's tremendous summer last year which culminated in two Listed victories.

Those trends might not translate directly into 2020. The topweights this year are rated just 99. The history is helpful, though, in the sense that it points towards focusing on sprinters with bright futures rather than this being a race where the old favourites tend to hold sway.

There are only two four-year-olds and no three-year-olds in the race this year. Of the pair aged four, Princes Des Sables is making her post-shutdown reappearance, while Jonah Jones has only recently been reinvented as a sprinter.

After winning over course and distance as a juvenile, Jonah Jones moved up in trip last year but dropped back to the minimum on his debut for Ed Walker in June. He was a significant eyecatcher that day and again shaped better than the result at Ascot last time.

A sharpish six furlongs should suit at least as well as a stiff five. The only slight concern is his draw in stall 2, which is hardly the coffin box but it is unlikely to prove as favourable as stall 20 was last time (first four drawn were 18-19-20-17 of 20). Note that the stalls are on the far rail.

Gunmetal: boasts form as good as any in this race
Martin Lynch

Jonah Jones's chances stand out among the younger horses, so it is worth noting that a good number of the veterans lurk on tempting marks. Gunmetal is a standing dish in races like this and has dropped 10lb in less than a year without suggesting that he is markedly on the downgrade, while even outsiders like Hyperfocus and Terentum Star have form that recommends them, albeit in both cases it came on testing ground in October.

Michael Dods, trainer of Camacho Chief
I think he's better over 5f and we were going to go to Ascot instead, but it didn't look as if they were going to get much rain so we left him in here. The trip stretched him a bit when he was sixth behind Dakota Gold last year, but he's a year older and in good form as we saw last time. Any rain would help.

Adam Ryan, assistant to his father Kevin, trainer of Princes Des Sables
She was quite heavily punished for an easy win at Haydock last year, but she's a bit better treated again now. She's freshened up well and the easy six furlongs at York should suit her. She's very well and should do herself justice.

Tim Easterby, trainer of Golden Apollo, Hyperfocus and Music Society
Golden Apollo has run well twice in the race before and is in great order so should run well again. He doesn't want it too quick, so good or good to soft ground would be perfect for him. Hyperfocus loves the track and likes a bit of juice. He'll run very well too. Music Society didn't quite get home at Hamilton last time but ran a good race and should have a good chance off a low weight.

Ed Walker, trainer of Jonah Jones
He's looking fabulous and I have been very happy with him since Ascot. Bringing him back to 5f seemed to work to a degree and he's run a couple of big races, but we are hoping the flat and sharp nature of York's 6f will really suit him and it is great that Frankie takes the ride. He's definitely a horse with big races in him and if all goes well here we might have a look at the Stewards' Cup.

David Griffiths, trainer of Teruntum Star
He won at Newbury last year and is back down to the same mark. He likes York and ran a bit better last time at Hamilton. Kevin [Stott] has won on him a couple of times and the horses seem to be turning a corner.

Richard Fahey, trainer of George Bowen
He was back to form at Pontefract last time when second to Summerghand and is dangerously well handicapped. If he can build on that he’d go very close.

FIRST PUBLISHED 6:00PM, JUL 25 2020
The history is helpful in the sense that it points towards focusing on sprinters with bright futures