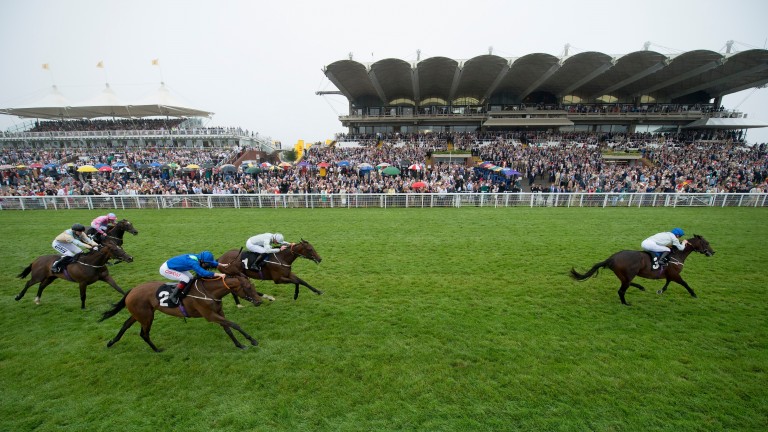 The jump jockeys will compete in the annual Flat contest
Edward Whitaker (racingpost.com/photos)
1 of 1
By Jonathan Harding 6:07PM, OCT 13 2018

With winters in Dubai and fewer falls, the lives of Flat jockeys can often appear glamorous to their jumping counterparts, who will be given a rare chance to change tack at Goodwood on Sunday.

Among the 16-strong field in the annual contest for jump jockeys at the picturesque West Sussex course is Joshua Moore, who rides in the race for the third time and will partner Rydan, trained by his father Gary.

"If I could ride on the Flat then I would because I average about two broken bones a year at the moment," said Moore.

"It's a better option if you can do it, but you have to have a quicker brain – any jump jockey who tells you they wouldn't ride on the Flat is lying!"

The jump jockeys' Nunthorpe at York was won this year by Graham Lee, a former jump jockey, and Moore continued: "A race like this is quite laid-back and should be good fun.

"There's plenty of banter in the dressing room, particularly after the York equivalent, as Tom Scudamore, who was runner-up this year having won it last year, still says he's a Nunthorpe-winning jockey."

Moore had first choice of his father's horses heading into the race, with Conor Shoemark picking up the ride on High Command, whom Moore rode in a Plumpton hurdle last time.

"I rode in the race at Epsom last year and this is another great opportunity for us jumps guys to switch things up," said Shoemark.

"There's a bit of friendly rivalry and I'd love to beat them all, as it would be great to have bragging rights."

He added: "I definitely would have pursued a career on the Flat and spent my winters in Dubai if I was light enough, but I'd probably have to lose a leg!"

FIRST PUBLISHED 6:07PM, OCT 13 2018
If I could ride on the Flat then I would because I average about two broken bones a year at the moment