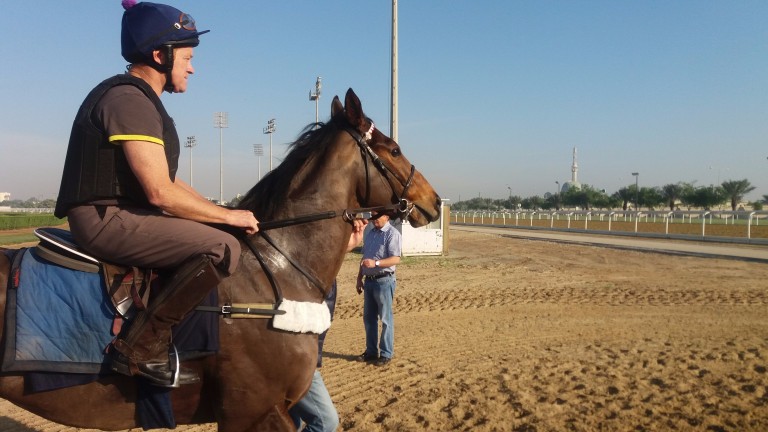 Eve Johnson Houghton, who has enjoyed her most successful campaign, aims to cap it in style when Scarlet Dragon runs in the $500,000 Qatar Derby and the trainer is giving her stable star a fighting chance of pulling it off.

His main rival appears to be Noor Al Hawa, who has won two Group 3s in Germany and is joined by compatriot Noble House.

Johnson Houghton, who has saddled 41 winners in Britain in 2016 for prize-money of £502,560, said: "It's been a phenomenal year. I've had some better horses and more of them, and they've stayed healthy, but in April and May I couldn't buy a winner!"

She added: "He's settled in really well here and is a great traveller. He's doing everything right, but you never really know how they've taken it until the race. I couldn't be happier with him.

"Noor Al Hawa looks the one to beat, but he seems to have done his winning with cut in the ground so I'm hoping that will be in our favour.

"It's a big pot to go for and, while he's had a busy season, he's had a month's break since his last run.

"If he wins it would open up the possibility of more travelling and if he's good enough I'd love to take him to Australia next year, but he's got to find another 20lb to get there so let's not get ahead of ourselves."

Andreas Wohler, who trains Noor Al Hawa, knows what it takes to succeed in Australia having won the 2014 Melbourne Cup with Protectionist and reports his challenger in fine form, although he agrees with Johnson Houghton about the ground.

He said: "My horse travelled very well and has settled in well, so I'm quite confident. His strengths are his will. He hasn't been out of the frame in his life; his worst finish was third.

"The ground's the only concern; he'd appreciate a bit more cut, which we won't have, but if he gets over that he should run a good race."

Fellow German raider Noble House, on the other hand, should find conditions suit.

Trainer Mario Hofer's daughter and assistant Steffi said: "He's got a bad draw [in stall 14], but the ground will be okay – he loves it quick. We'll be happy if he's in the first five."

Alan Munro, who won the Derby on Generous in 1991, has a ride on French Encore, while Harry Bentley, three-time champion jockey in Qatar and on his way to a fourth title, partners local hope Opera Baron for leading trainer Jassim Mohammed Ghazali.

"He's got a good enough chance, but might just be up against it in this quality of race," Bentley said. "He's done nothing wrong and is two from two this season and is definitely one of the best local horses."