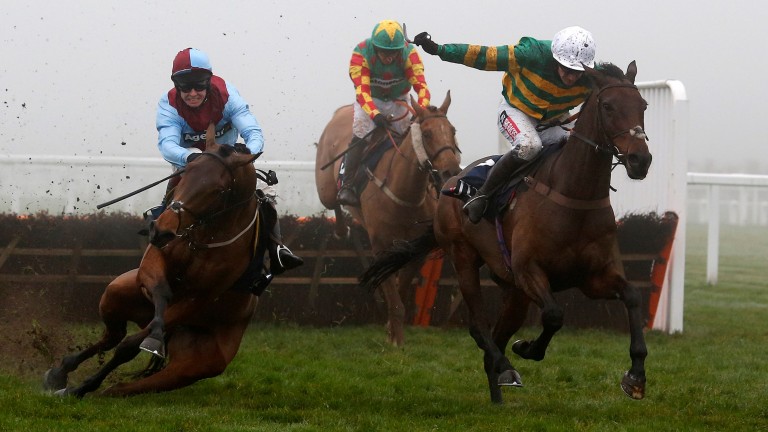 Richard Johnson will be back in the saddle at Hereford on Monday after missing the ride on Sternrubin in Ascot's final race following falls in three successive races.

The champion jockey, who has ridden 124 winners this season and is 44 clear of closest pursuers Brian Hughes and Sam Twiston-Davies, was lucky to escape with bruising to a leg after early falls from Pull The Chord and Go Conquer and a last-flight mishap when still in with every chance on Ballyoptic in the Long Walk Hurdle.

He said: "I'm not too bad. I was very sore but it's got better and better. After a bath I knew I'd definitely be okay to ride at Hereford, where I ride Uncle Jimmy for Philip [Hobbs] in the novice chase.

"It wasn't ideal. In the first fall I got squashed on the top of my leg, and in the last one it was the bottom of my leg, but I just got kicked around and luckily no bones were broken."

Ballyoptic's fall was shrouded by thick fog, and only Johnson knows how Ballyoptic was travelling. He is not saying he would have won, but he is not convinced he was beaten.

He said: "Unowhatimeanharry obviously ended up winning well, but Ballyoptic wasn't stopping. We were still upsides and it was a funny fall as he didn't really do a lot wrong at the hurdle.

"We landed, went a stride, and then he lost his back end and slipped over. I can't say he would have won, but he definitely wouldn't have been far away. It was disappointing for everyone, but hopefully he'll put it right somewhere soon."

FIRST PUBLISHED 1:24PM, DEC 18 2016
We landed, went a stride, and then he lost his back end and slipped over. I can't say he would have won, but he definitely wouldn't have been far away