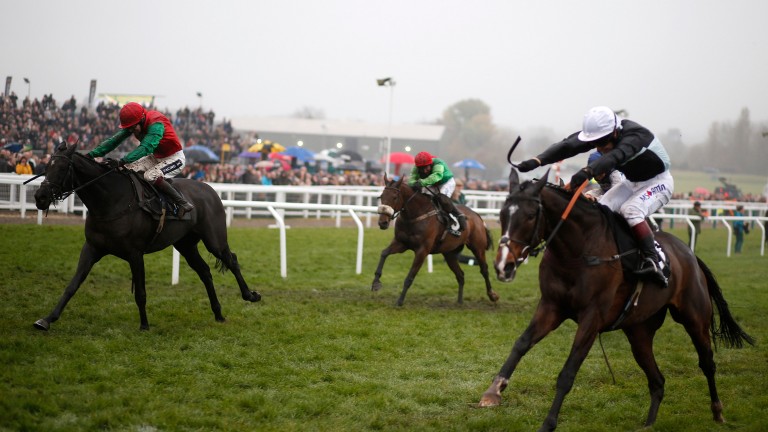 Village Vic (nearest camera) gives his all but can not contain the late surge of Taquin De Seuil.
Alan Crowhurst
1 of 1
By David Jennings 3:48PM, NOV 13 2016

He led over the first. He led over the last. He led over all the fences in between. He was in front a furlong out and still there 100 yards from the line but Village Vic had given everything and was unable to repel the last-gasp swoop of Taquin De Seuil who spoiled the brave front-running bid.

"He was brilliant and I just feel a bit mugged," said champion jockey Richard Johnson. "I could see Aidan [Coleman] out of the corner of my eye and I drifted across to him to give my horse something to run with. I thought I might find a bit more but the winner is a very good horse on his day and it was a great performance from the winner so it is very frustrating."

Those final few yards must have been painful viewing for Phillip Hobbs too, especially since he had allowed himself to think that his gallant nine-year-old would win jumping the last. It wasn't to be but he will be back to defend his Caspian Caviar Gold Cup crown next month.

Hobbs said: "The obvious thing is to come back here in a month's time for the Caspian Caviar Gold Cup. Actually, he's run the race of his life. I thought jumping the last he'd win, but that's not where the winning post is, is it? So he's run really well."

Buywise did what Buywise does best. He gives his connections great value for money but it was more placed-money for them as he once again flew up the hill to take third. He was second in it last year with an almost identical display. Evan Williams was proud of his bridesmaid, though.

"He's a remarkable horse. He's very difficult to ride and difficult to watch. Paul [Moloney] comes in for a lot of criticism; people say you've got to lay up with him, but you can't. He was very cold all the way round here today.

"I think he's a very nice horse to own and to train, but he's always the bridesmaid. Coming back here next month for the Caspian Caviar Gold Cup would be the obvious thing but the ground now is soft enough for him. He doesn't want it any softer," Williams said.

Young Charlie Deutsch thought he might have nicked it on Aso turning in but he had to settle for fourth.

"He gave me a great spin. He loved every second of it, as did I. I thought I might win turning for home," Deutsch said.