Johnson bids to break big-race hoodoo on another Tizzard star 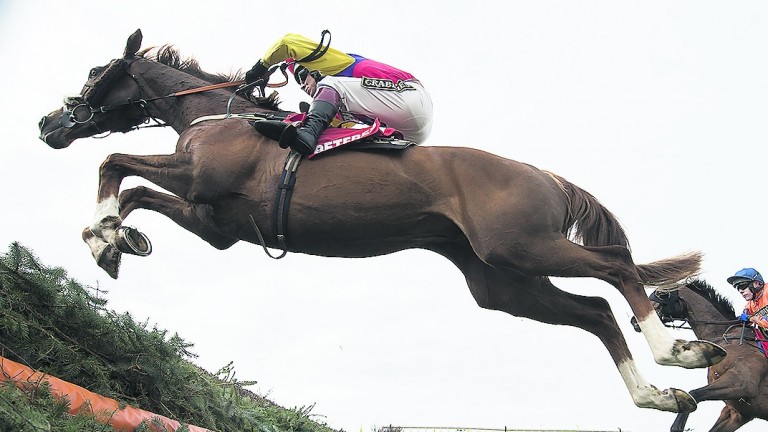 Colin Tizzard agrees Native River looks to be the one to beat in the Hennessy Gold Cup
Edward Whitaker
1 of 1
By Lee Mottershead 6:52PM, NOV 25 2016

Sir Anthony McCoy achieved almost everything there was to achieve in his record-busting career, but one achievement that eluded him was victory in the Hennessy Gold Cup.

Success in the Newbury showpiece has also eluded his long-time rival Richard Johnson. Until now, perhaps.

It was in 1998 that the sport's reigning champion jockey first rode in the race. He finished second and did so again in 2011 but, aboard ante-post favourite Native River, he has a clear chance of writing his own name into the great prize's roll of honour in its 60th year.

Johnson was the lucky man who steered Native River to an exhilarating near all-the-way success in the Grade 1 Mildmay Novices' Chase at Aintree. He was also in the saddle when Native River made a pleasing reappearance over hurdles at Wetherby.

Understandably encouraged, trainer Colin Tizzard, victorious in last week's Betfair Chase with Cue Card and also represented here by a Hennessy second and third in Theatre Guide, describes Native River if not as a good thing then "a goodish thing".

This, though, is a scalding hot Hennessy, with the weights headed by last year's marvellous winner Smad Place, 12 months on running off top weight and an 11lb higher mark.

Next on the card is Cheltenham Festival handicap winner Un Temps Pour Tout, who finished fourth to Native River off level weights at Aintree but here concedes him 3lb. However, he did score over hurdles back at Aintree, where another of this year's leading fancies, Vyta Du Roc, was 18 lengths back in third.

Add in the likes of RSA Chase winner Blaklion, last year's disappointing favourite Saphir Du Rheu and his Scottish Grand National-winning stablemate Vicente and we have an absolute cracker on our hands.

Putting Place in context
To help assess the task facing Smad Place, consider that Denman twice defied the biggest weight burden in the Hennessy, the first time off a rating of 161, the second time off 174. Smad Place is rated 166.

Friends reunited
There are two former Hennessy champions in the line-up, with Smad Place joined by 2013 winner Triolo D'Alene. However, no horse here has more Hennessy experience than Houblon Des Obeaux. The 2014 runner-up is contesting the race for the fourth time and won Newbury's Denman Chase in February by 28 lengths.

Lizzie again?
The most inexperienced chaser in the field is Aubusson. He is also one of the contest's most fascinating runners and bids to give Lizzie Kelly and Nick Williams their second major Newbury handicap win of the year following Agrapart's success in the Betfair Hurdle.

Alan King, trainer of Smad Place
Smad is now 11lb higher and could be vulnerable to something lower down the weights. Having said that, I was delighted with his comeback at Aintree, where the two and a half miles was always going to be too sharp for him. He jumped super, stayed on really well and is sure to have come on for that first run.

David Pipe, trainer of Un Temps Pour Tout
He ran a nice race over hurdles first time out and has been going well since. We're badly off at the weights with Native River but the handicapper assures me he's got it right. This looks the right race for him and I think if he gets into a nice rhythm he'll run well.

Colin Tizzard, trainer of Native River and Theatre Guide
Without being too bullish, Native River looks like he could be a goodish thing. He has been favourite for ages and his final two runs last season were excellent. He needs to improve 10lb to be a Gold Cup horse but we'll find out if he's improved at Newbury. He had a hard enough race at Wetherby but he's a dour stayer and I don't think there's a bottom to him. We've played about with Theatre Guide's wind the last couple of years and this time he had the big op. He doesn't make a noise now. He looked a million dollars when he won the valuable handicap at Kempton and is bang on his job for the Hennessy.

Nigel Twiston-Davies, trainer of Blaklion and Double Ross
Blaklion seems to be a bit of a forgotten horse. He seemed to be all the rage at the end of last season, yet people have forgotten about him after one defeat this season. The ground was quick enough for him at Wetherby. I think he's well handicapped and feel he has a very good chance. Double Ross has been around a long time and, as a result, has no secrets from the handicapper. He goes there in great form.

Paul Nicholls, trainer of Saphir Du Rheu and Vicente
Saphir Du Rheu has pleased us since Ascot, where we knew he'd need the run as he’s a big horse. I thought it was a nice run off top weight. He’s done very well since and has a much more attractive weight than last year. Vicente is a thorough stayer and could run well. He has a lot in his favour but he’s 5lb higher than in the Scottish National.

Peter Bowen, trainer of Henri Parry Morgan
When you think how well he ran at Aintree you have to feel his mark is fine. He would have had a good chance in the bet365 Gold Cup had he got round, but this is an even hotter handicap. He's had two racecourse gallops so fitness won't be a problem.

Nicky Henderson, trainer of Triolo D'Alene, Vyta Du Roc and Hadrian's Approach
I suppose Vyta's profile matches the race, but when we won it with Trabolgan and Bobs Worth they'd won the RSA. Vyta didn't do that, but he's at the other end of the handicap and is progressive. Aintree did him good and he had a gallop with Triolo at Newbury last week. Triolo is in absolutely excellent form. He's been working very well and the more it dries out the better. I've been happy with Hadrian's and he deserves to have a crack at it.

Nick Williams, trainer of Aubusson
This is a bit of an afterthought as we'd been thinking about going to Cheltenham in two weeks' time but thought the track and distance of the Hennessy might work for him. We're definitely not moaning about his mark, but the fact he has had only two runs over fences is obviously a concern.

Neil Mulholland, trainer of Carole's Destrier
It's a pity he couldn't run in the Badger Ales due to the ground but he's as fit and well as we can have him for his first run of the season. Noel [Fehily] was very pleased with him when he schooled this morning. He goes there 2lb higher than when he won the London National.

Anthony Honeyball, trainer of Regal Encore
He was found out in some hot handicaps last season but there was no chance for him to breathe. He then ran a nice race and jumped better at Punchestown on better ground, which we think he wants, but he has been whacked up 8lb. We tried to get a prep run into him but the ground was too quick. He seems a massive price, although I'm not saying the price is wrong. His cv won't be complete until he wins a big race – but I'm also not saying that's going to be the Hennessy.

FIRST PUBLISHED 6:00PM, NOV 25 2016
Without being too bullish, Native River looks like he could be a goodish thing