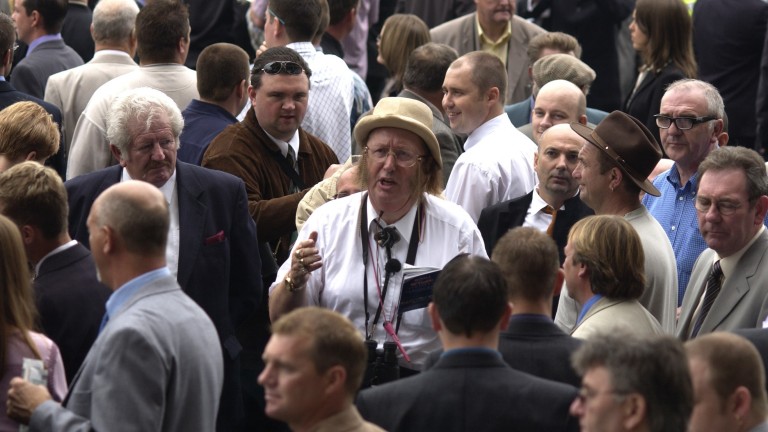 John McCririck reports on the market movers in the Doncaster betting ring in 2002
Edward Whitaker (racingpost.com/photos)
1 of 1
By Andrew Franklin UPDATED 4:02PM, JUL 5 2019

Mac was the single on-screen thread that ran through racing on television from 1980 to 2012 – and from the very first time he appeared he had instant presence.

He had so many qualities, not least that he was fearless. There was a day at Chester when he felt bookmaker overrounds were too high, so he went down a line of boards and challenged them about it live on air, telling them to their faces they were exploiting racegoers. He was a terrific champion of the punter. He also had a marvellous populist touch allied with a razor-sharp editorial mind.

I found him a joy to work with, not least because he was excellent at taking instruction. He was very forceful in his views but, as with his time on newspapers, he knew the final say rested with the editor or producer. He would jump up and down for something he passionately believed in, but if it was at odds with the views of the producer he would accept that the boss was the boss and did as he had been asked.

Among those of us who worked on Channel 4 Racing he was supremely well liked – and for all his chauvinistic bluster the girls on the team adored him. He liked everyone to have a nickname. There was Jimbo, Greatest Jockey, Noble Lord, Saucy Minx, Languid, GG, Pouting Heiress, Lord Snooty and Fe-mail. For a while he was struggling to find a nickname for Alastair Down until a horse came along called Heros Fatal – and Alastair became Fat Al. He loved that one – although it was a bit rich coming from him!

The one who put her foot down was Lesley Graham. At the start of a morning meeting I produced a viewer's letter. The viewer had written a glowing appraisal of Lesley and finished off by saying he thought she was "a lovely bit of crackling". Mac suddenly shouted: "That's it. Crackling!" Lesley glowered at him and said if he so much as dared call her Crackling on air there would be a riot.

John was also central to a funny story on an Arc day when one of the earlier races resulted in a stewards' inquiry.

He happened to be on screen talking about the odds for the next race when the 'bing-bong' sounded. In mid-sentence he broke off and told viewers the minute we had all been waiting for was here and the result of the inquiry was about to be declared.

At that point the announcement was indeed made – but, as you might have expected given we were at Longchamp, it was made in French. Having brought the programme to a grinding halt the blood just drained from Mac's face and he froze with the realisation his command of the French language was painfully lacking. We shouldn't have laughed in the gallery at the poor sod's humiliation – but we did! 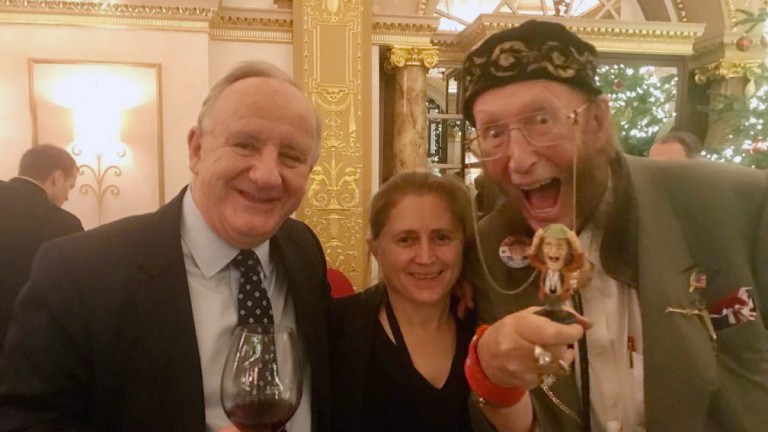 John McCririck with Laurence Robertson MP and his wife Annie

Everyone knows Mac didn't like talking about his age, which meant it took us a long time to find out his birthday. We managed to discover the date rather surreptitiously one day by gathering together all the team's passports at an airport check-in. Unwittingly he handed over his passport without realising there was an ulterior motive.

We then happened to be broadcasting from Ayr on Mac's birthday. On The Morning Line we did a live inject from an Ayr betting shop, where Mac interviewed the manager, who I had spoken to beforehand. As well as hating birthdays, Mac detested practical jokes. So, as he was handing back to the team at the racecourse, the manager, right on cue, struck up a chorus of "happy birthday to you" with punters in the shop all joining in.The camera lingered on Mac, who was waving his hands around, trying to get them to stop – but to no avail.

In one sense Mac passed away a very happy man because he got a highly unlikely treble up. He saw Donald Trump into the White House and Nigel Farage bring about Brexit, both of which delighted him politically. On top of that, following what he perceived to be an unfair dispensing of his services, he saw Channel 4 lose the racing contract. For John that was the ultimate treble and he was openly jubilant about it!