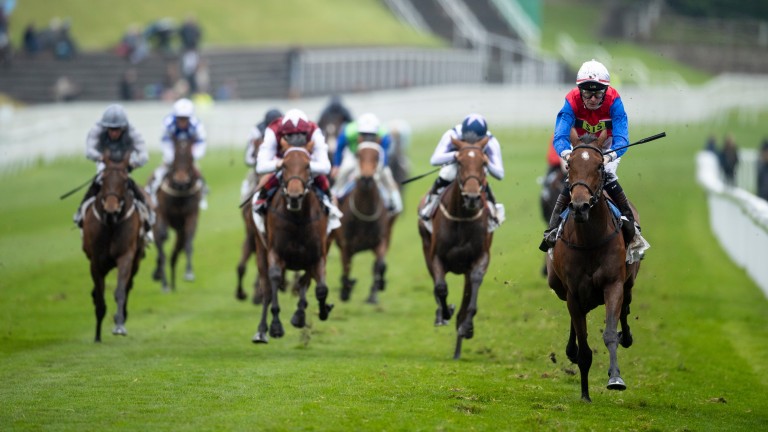 Mehdaayih: winner of the Cheshire Oaks last week and an Epsom market mover
Edward Whitaker
1 of 1
By Kitty Trice UPDATED 4:19PM, MAY 14 2019

Mehdaayih, who scored by four and a half lengths at Chester last week, was available at as much as double those odds on Monday. She does not currently hold an entry for the Epsom Classic and would need to be supplemented.

Pink Dogwood, trained by Aidan O'Brien, is now the second favourite at 7-2, with 1,000 Guineas heroine Hermosa a general 6-1 chance and Mehdaayih's stablemate Anapurna available at 10-1.

Coral's David Stevens said: "Although Mehdaayih does not yet hold an Oaks entry, and her trainer John Gosden has a strong team of Epsom contenders with the likes of Anapurna and Sparkle Roll, punters seem convinced she will be the one to beat next month and have backed her into favouritism."

Paddy Power spokesman Paul Binfield added: “Our traders had a good look at the Oaks this morning and they’re keener on Mehdaayih than Pink Dogwood in what doesn’t look the strongest of Oaks renewals. So we’ve flip-flopped the favourite in a market where at the top end Maqsad might not line up and Anapurna won a trial that we’re not convinced is the highest level of form.”

Gosden, who saddles Sparkle Roll and Entitle in tomorrow's Musidora Stakes at York, is the only trainer to have broken O'Brien's recent stranglehold on the fillies' Classic, with Taghrooda and Enable obliging in 2014 and 2017.

FIRST PUBLISHED 11:31AM, MAY 14 2019
Our traders had a good look at the Oaks this morning and they?re keener on Mehdaayih than Pink Dogwood

Can one-of-a-kind Jim Bolger pull off more Group 1 heroics with Poetic Flare? Key turf figures from past and present turn out to say goodbye to Barney Curley Oaks second Mystery Angel could head to Goodwood in search of Group 1 win