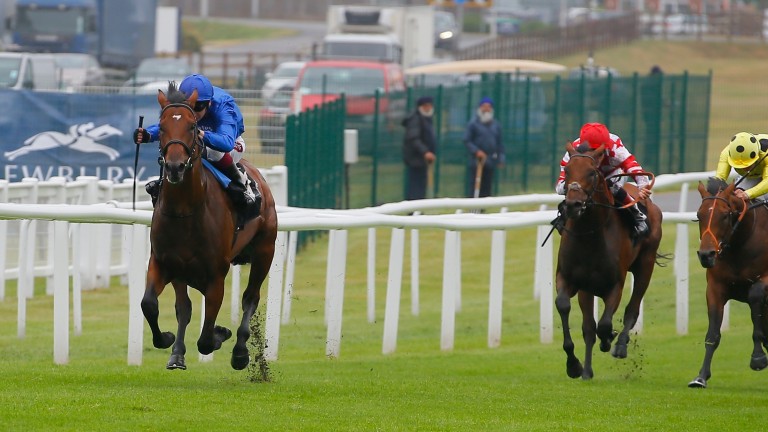 John Gosden will be chasing a record-equalling sixth win in the
Group 3 Betway Solario Stakes at Sandown on Saturday and this year could rely on the progressive pair of Encipher and Eshaasy.

The Newmarket trainer will draw level with the late Sir Henry Cecil in the two-year-old feature if one of the duo can emulate Gosden greats such as Raven's Pass (2007), Kingman (2013) and last year's winner Too Darn Hot.

The seven furlong race has been a key juvenile event in recent years and was won by subsequent Derby hero Masar in 2017.

This time around Encipher could bid to bridge the gulf from novice company after winning by two and a half lengths from subsequent scorer Native Tribe at Newbury in July.

The son of Siyouni, who is a 6-1 chance with Paddy Power, could be joined by stablemate Eshaasy, who won on his second start at Kempton this month.

Positive, who chased home leading juvenile Pinatubo in the Group 2 Vintage Stakes at Goodwood last time, is the 7-4 favourite.

Others among the 18 strong entries include the 1.1 million guineas Dubawi colt Al Suhail (9-4), who won easily on his second start at Yarmouth last week and represents Charlie Appleby and William Buick.

Mark Johnston has three entries, including Visinari, who is aiming to bounce back from a disappointing fourth behind Pinatubo and Positive in the Group 2 Vintage Stakes at Goodwood, and the unbeaten Thunderous, winner of the Listed Denford Stakes at Newbury last time.

Paul Binfield, spokesman for Paddy Power, said: "We feel positive about the prospects of Positive at Sandown on Saturday. He ran into a real top-notcher last time and looks a worthy favourite."

FIRST PUBLISHED 5:07PM, AUG 26 2019
We feel positive about the prospects of Positive at Sandown on Saturday. He ran into a real top notcher last time and looks a worthy favourite