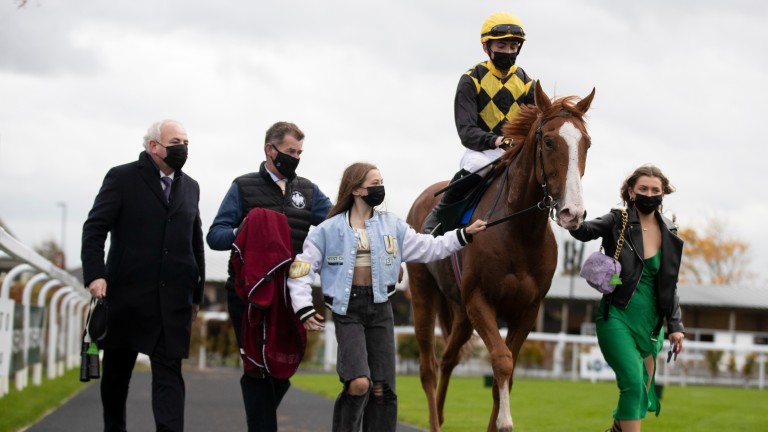 On a day when the students took over at the Curragh, it was fitting the younger generation of riders stole the show on the track.

John Gleeson, who has only ridden a handful of winners since taking out his licence this year, may have been facing off against some of the best to ply their trade in the Amateur Derby, but he came up trumps aboard the Joseph O’Brien-trained Raise You.

O’Brien may not have been in attendance but his assistant Brendan Powell was in little doubt the man aboard Raise You is going places fast and labelled the winning ride “a peach”.

Few would disagree with Powell as Gleeson punched out Raise You to a comfortable success for his greatest success in the saddle to date.

Powell said: “He did it well and John gave him a peach of a ride. I don't think they went overly quick early and the one thing the horse did today was he settled very well, because he can be a bit keen.”

Powell added: “He won over a mile and a quarter as a three-year-old in England and he really kicked clear there and did it well. It opens up things a bit more.

“I thought for a lad who has only been riding for six or eight months John gave him a beautiful ride. It's great for the family – that's what it's all about – and it's a good way for them to finish the season.”

Just when Noel Meade had started to run out of ideas with Crassus, along came 10lb claimer Neil Ryan to transform the horse’s fortunes in the 1m2f handicap.

Crassus came to the Curragh with just one win from 24 starts to his name and even Colin Keane had tried and failed to get him home in front this season.

Just when Meade’s patience had begun to wear thin, Crassus came good again on run number 25, with Callan punching the air in delight to celebrate his first winner.

Meade said: “I'm so thrilled for the young lad because he rides all the work at home. He's been with me all last season and he's a smasher. He served his time with Kevin Prendergast as an apprentice.”

He added: “I'm sure he'll get a few rides now over the winter on the all-weather after that. He's a grand chap, a lovely lad, who works hard so I'm delighted for him.