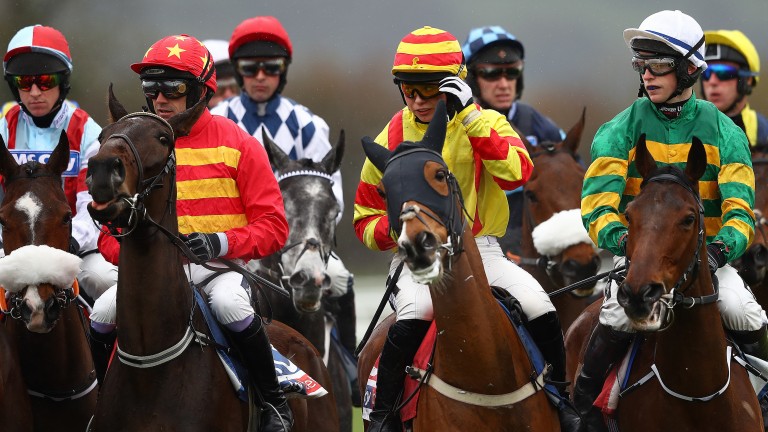 Jockeys prepare for the start of the Supreme Novices' Hurdle on Tuesday
Getty Images
1 of 1
By Peter Scargill 6:44PM, MAR 12 2019

The fabled Cheltenham Festival roar was heard twice on the first day of the meeting as false starts blighted four races on the opening afternoon.

The Supreme Novices’ Hurdle, Arkle Novices’ Chase, Ultima Handicap Chase and Close Brothers Novices’ Handicap Chase were all run from a standing start after the starting procedure was deemed to have been infringed, with several runners breaking the tape before the Supreme, including winner Klassical Dream.

The decision to bring back the start of the Close Brothers, the sixth race on the card, drew audible and significant boos from the record crowd of 67,934 as racegoers grew frustrated by the delays to the action.

No jockeys were reported by the starter to the stewards for what happened, but the riders are set to be reminded of what is required from them at the start following the misdemeanours.

This will come at the mandatory daily briefings, which are taking part this week as part of recommendations brought in by the BHA following the 2018 Cheltenham Festival review.

Robin Mounsey, BHA head of media, said: "Jockeys are reminded of their responsibilities at the start in the daily briefings. However, it is important to note that in all four false starts today the stewards were satisfied no riders should be reported for contravening the starting procedures."

Davy Russell, who finished top jockey at last year's Cheltenham Festival, was suspended for two days on Tuesday after disobeying the instructions of veterinary officers after the Arkle and acting in an improper way towards a racecourse employee.

Russell had been asked by the vet to take a turn on Hardline so he could be inspected after the race, but, according to the stewards' report, refused to do so.

FIRST PUBLISHED 6:44PM, MAR 12 2019
It is important to note that in all four false starts today the stewards were satisfied that no riders should be reported

Racing has its problems and it's up to racing to solve them Extra money - but less competition and lower crowds: the impact of more racing 'Like a man folding a deckchair' - amateur legend Brod Munro-Wilson dies at 76 Communications director Martin Fewell set to leave BHA Whether you love it or loathe it, the Racing League is ready to roll the dice New measures can ensure they are all well looked after