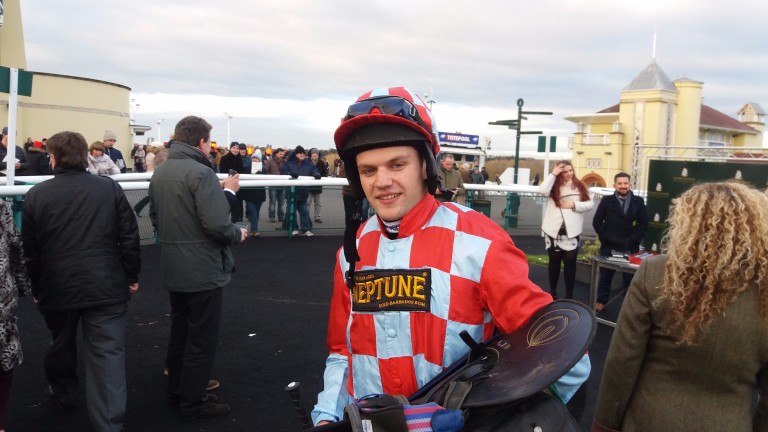 Jockey Harry Stock went from being on the cusp of certain victory at Leicester to spending eight hours in hospital on Friday night after fracturing his left collarbone in two places.

Stock, 22, and his mount Somewhere To Be had run their rivals ragged in the 2m4f handicap chase at Leicester only to fall at the last when six lengths clear.

Stock, who is conditional rider for trainer Martin Keighley, said on Saturday: “It’s a simple, straightforward break so I didn’t need surgery. We had a long wait as they wanted to look at a previous back injury I had. We were there for eight hours and fair play to Martin, he was with me the whole time.

“The doctors said six weeks but you know us jockeys, we tend to halve that. I’ll try get along to Oaksey House as well.”

Relieved to report that Somewhere To Be is sound & fine this morning and turned out for the day.

Harry Stock was in Hospital for nearly 8 hours yesterday but home safely & “just” a broken collarbone which is v sore but could have been much worse. Hoping for a speedy recovery.

With nine winners and £64,900 in prize-money banked, Stock was on course for his best season and he is hopeful of carrying on where he left off when he returns, including on Somewhere To Be, who was reported to be sound and in good shape on Saturday.

“The plan was to let him go out there, enjoy himself and never get headed and he was brilliant – the only mistake he made was at the last,” Stock said.

“It’s been a good season and I’ve been riding for a lot of new people and getting a few winners too. Hopefully I can pick that up when I come back.”

FIRST PUBLISHED 12:37PM, DEC 29 2018
The doctors said six weeks but you know us jockeys, we tend to halve that