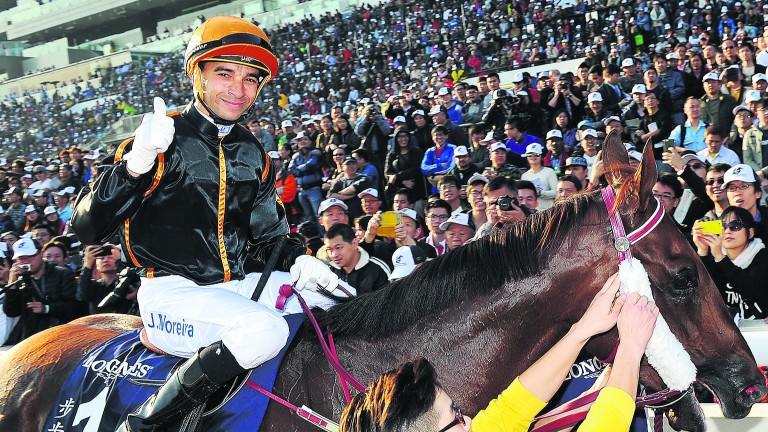 Joao Moreira elevated his already sky-high reputation even further on Sunday as he broke his record for winners on a single card in Hong Kong not once, but twice as he secured eight wins at Sha Tin.

Moreira, 32, had already become the first jockey to ride seven winners at a single meeting in Hong Kong when scoring on his penultimate ride, and there was more to come as Prawn Baba landed the final contest.

Known as Magic Man in Hong Kong, Moreira once again wowed the crowds as he secured wins in the first, second, third, fourth, sixth, eighth, tenth and 11th races.

He told the Hong Kong Jockey Club: "I really don't have words to describe it, it's amazing. We know how tough it is to make it here in Hong Kong.

"I didn't expect it to happen, to be honest. To ride eight winners in a day here in Hong Kong is more than special."

On four occasions before Sunday a rider in Hong Kong has ridden six winners at one meeting, two of those hauls going to Moreira, but he now stands out on his own after guiding Mighty Maverick to success in the penultimate race and then Prawn Baba in the last.

Moreira was sprayed with champagne by colleagues after the race, having produced a string of champagne performances on a card he utterly dominated. He rode in ten of the 11 races for his eight wins.

Having already become the only rider to win seven races on a card, Moreira was not content to settle for that. In the final race, he positioned his mount Prawn Baba on the outside around halfway down the field before making a move turning for home.

His rivals looked to be going better at the top of the straight but Moreira was in insatiable form and he surged to another win.

The commentator screamed: "A wave of the wand, a puff of smoke and the Magic Man pulls one out of the hat and makes it eight."

The Brazilian is no stranger to riding multiple winners on one card, securing eight wins from eight races in Singapore and six wins at Sapporo racecourse in Japan, as well as his Hong Kong heroics.

Joao Moreira's feat is not quite a world record for the most winners ridden on one card, but when he achieved his previous eight-timer he set a world record in a different category.

Moreira won on all his eight mounts at Kranji, Singapore on September 6, 2013, and thus enjoyed the best perfect day by any jockey in the history of the sport – ie the most winners with no losers.

He won the first four races that evening, sat out the fifth, which was for apprentices, and won the last four on the nine-race card.

The world record for one card is still nine winners, set by Eddie Castro at Calder, Florida, on June 4, 2005.

Castro rode in 11 of the 13 races on that card and his victories included the Office Queen Stakes on Snug Harbour.

The Panamanian had won the Eclipse Award as North America's top apprentice in 2003 and went on to win the Breeders' Cup Mile on Miesque's Approval in 2006.

Chris Antley also won nine races in one day, but at two meetings – four in the afternoon at Aqueduct and five in the evening at The Meadowlands – on October 31, 1987.

Quite a few jockeys around the world have ridden eight winners on one card with at least one loser, including Pat Day and Yutaka Take. Christophe Lemaire did so at Fuchu, Tokyo four months ago.

The British record for the most winners on one card was famously set by Frankie Dettori, who won all seven races at Ascot on September 28, 1996, including the Queen Elizabeth II Stakes on Mark Of Esteem. Richard Hughes equalled that record at Windsor on October 15, 2012, but he also rode one loser.

Pat Eddery also rode seven winners in one day, but at two meetings –three in the afternoon at Newmarket and four in the evening at Newcastle – on June 26, 1992.

FIRST PUBLISHED 9:03AM, MAR 5 2017
A wave of the wand, a puff of smoke and the Magic Man pulls one out of the hat and makes it eight