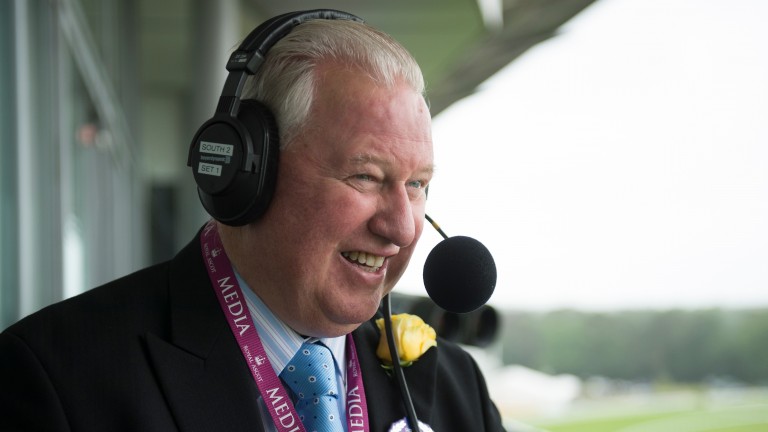 Jim McGrath: voiced over live pictures of the evacuation of the 1997 Grand National
Edward Whitaker (racingpost.com/photos)
1 of 1
By Matt Rennie UPDATED 3:52PM, JAN 15 2021

Saturday, April 5, 1997, and the stage was all set for the 150th running of the Grand National with the BBC coverage in full flow. What was to follow on TV screens across the world after 2.49pm that day was shocking.

A bomb threat from the Provisional IRA forced a mass evacuation from Aintree and the abandonment of racing. Pictures of crowds gathered on the inside of the track and in the surrounding streets were broadcast alongside the sombre sight of the empty grandstands, weighing room and paddock.

The BBC team were not exempt. Lead presenter Des Lynam was forced to interview then-jockey Jamie Osborne, trainers and officials from the car park. The only man left on the track for them was commentator Jim McGrath. When his colleagues were ushered away from the track, he held the fort by voicing over live pictures of the shocking scenes.

There was no bomb but the damage had been done to Saturday's big sporting highlight. Remarkably, however, the race was restaged 48 hours later and the Monday Grand National was won by Lord Gyllene in front of a teatime BBC audience. It was a magic TV moment that put the sport and its favourite race back on centre stage for all the right reasons.

The day was all about Sir Peter O'Sullevan's 50th and last Grand National commentary. The scene was set for what should have been the most celebratory occasion around the greatest sporting commentator of them all.

I was positioned high up in a tower right opposite the Foinavon fence, the most coveted commentary position at Aintree. As usual, I went out there very early due to the logistics of getting past security. There was also a very high ladder to climb, which was very precarious.

I didn't have a clue what was to come, so much so that I was preparing to leave the commentary box when we heard [Aintree managing director] Charles Barnett's announcement with Des in the car park. That day Gordon Brown [of Racing TV] was assisting me and we prepared to leave the commentary position, then I heard the producer Malcolm Kemp say "stand by Jim", and I thought "what am I standing by for?"

Even the cameramen were evacuated. I could hear Malcolm say to them, "lock your camera in position and leave immediately". There were four cameras each focusing on a different part of the course. For that period of time, we kept going from one shot to the next and I talked over them.

I was very grateful to have Gordon beside me because he was able to feed me information as he was working as a reporter for the Racing Post. He did a story earlier in the week about security at Aintree and had a lot of statistics, but the key thing was not to presume this was terrorism, that any particular faction was to blame, and to relay the facts as we knew them at the time.

I was continually going from one camera shot to the next. I wasn't aware of how long I was on until the last minute, when it was getting tiring. Those 13 or so minutes were the most challenging I ever had in my 40 years as a commentator.

I kept on commentating with Gordon beside me until we heard somebody coming up the rattling ladder. I knew security had rumbled us.

They burst into the box and ordered us to leave and we ended up in a McDonald's on Ormskirk Road. The BBC then had a meeting in a tent in the car park. Sir Peter was very concerned it would be cancelled. The mobile phone networks had been blocked and we were speculating on what course of action they'd take. It was a very long night.

Thankfully there's been nothing like it since. When you're building up to one particular race, it's the only thing in your thoughts, then all of a sudden there's this huge mixture of emotions.

It was hugely important for the race and the country that we covered it. Everyone was held to ransom by a group that wanted to destroy one of the great sporting occasions. It's one of those bizarre occasions I'll never, ever forget.

When I was out in the car park being interviewed by Des – as stupid as it sounds now – we thought we'd be going back into the weighing room in half an hour and getting on with it. I don't particularly remember the interview and I presume I didn't say much too interesting in it.

When you're a jockey, you're incredibly selfish. The interview didn't cross my mind, I was still trying to find a way of winning the race.

Once Charles went on the BBC, there was a sense of disbelief. We didn't have any accommodation, no money, nothing other than the clothes we were standing up in.

What wasn't shown on television was a heap of us got a train back into town and went on the lash on Saturday night and woke up on Sunday to the news that it would be run on Monday teatime. It was an unprecedented situation to be a part of.

FIRST PUBLISHED 8:00AM, JAN 15 2021
We prepared to leave the commentary position, then I heard the producer Malcolm Kemp say 'stand by Jim', and I thought 'what am I standing by for?'

'He oozes class and backed up an emphatic maiden win really well' 'I had to learn online basics just to bet' - how the pandemic changed punting A must-read glimpse behind the mystique of one of sport's most revered names The drugs bust, the stun gun and the most extraordinary Royal Ascot finish 'One second he was going to win - the next he was heading to the street' 'The three-year-olds and juveniles look particularly exciting'
Bookmaker
Price
E.W. Terms
bet365
Open Account
Ladbrokes
Open Account
William Hill
Open Account
Coral
Open Account
Paddy Power
Open Account
Betfair
Open Account
Sky Bet
Open Account
Sporting
BetVictor
Boylesport
888sport