Richard Pugh assesses winning performances at all the weekend meetings 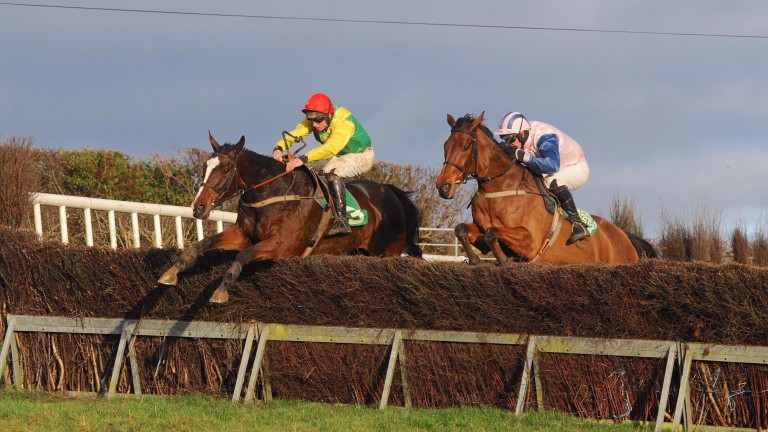 Benatar (92+) raced keenly throughout the four-year-old maiden and has to be taken seriously, given the way he picked up in the closing stages. In a race with some well- regarded youngsters, he quickened clear impressively and was widening the advantage of 15 lengths at the line with every stride he took. He looks potentially top class.

As the Crow Flies (88+) has deservedly taken his maiden having twice finished second in maidens and fourth in a bumper. He will have no difficulty in stepping up to winners’ level.

Kraken Tale (92) is now a three-time winner and a maiden hunter chase could be his best option into the future. This mark sees him a notch below open company but he is going the right way.

Ballela Magic (76+) is a tough mare who dug very deep when her rivals came to challenge. That attitude will ensure she has a real chance of adding a track bracket to her CV.

Grand Jesture (105+) got off to a winning point-to-point start and while this mark does not point to him being a stand-out candidate, he should progress notably for this outing and his class will make him a formidable opponent this season.

Incitatum (88+) came into this older maiden with decent track form and duly delivered by a neck. This was an above-average older maiden, so winners’ company should be a very smooth progression for him.

Just Don’t Ask (89+), the only runner with previous experience, travelled powerfully throughout the four-year-old maiden in a steadily run contest, running out a convincing winner. The three-length winning margin does little to indicate his superiority over a well-bred rival and he looks a smart middle-distance recruit to the game.

Themagicofmelleray (85+) has to be viewed as a most fortunate winner as Smooth Spoon (88x) appeared to have the race in the bag only to crumble on landing at the final fence. To give the eventual winner his dues, he is a big-striding horse who would not have been suited by this sharp course and he is likely to go on to achieve better things.

The B (74+) had the advantage of race fitness as she battled gamely having come under pressure in the back straight to score on her third start of the season. The departure of Nickel early on the final circuit robbed this average-looking race of much of its depth.

Rosc Catha (93++) was barely out of second gear to prevail in a two-runner contest and this rating is consequently nowhere near what he can achieve.

Maple Mons (104+) bounced back to form as she made all to defeat last month’s Rathcannon victor Abigail Lynch (100) in a performance which suggests she will be tough to beat in mares’ company this season.

Thornfield (86+) set a searching gallop in testing conditions forcing each of his three rivals to fall into a hole and ensuring he was the only horse to complete. It is difficult to assess this performance, given how the race fell apart, but he looks to be progressing.

Regal D’Argent (80+) & Maria’s Benefit (80+) both dead-heated in the opening mares’ four-year-old contest of the season, eyecatchingly pulling comfortably clear of their rivals. Both look above-average recruits who will make their mark over middle distances on the track.

Timeforben (79+) stayed on stoutly from what looked an unlikely position in a race where favourite Ayleoola (77x) exited at the last while holding a slight advantage. It would have been interesting to see how the finish would have played out otherwise.

Legal Ok (92+) stole the race from the front in a remarkable contest where the field gave him an easy lead and he finished before his nearest rival had even jumped the final fence. Given how the race was run, it is difficult to assess, but he undoubtedly possesses a strong mix of speed and stamina that should see him as an interesting prospect under rules.

Robbin’Hannon (90+) impressed with a strong staying performance on debut to power clear of more experienced rivals. He is one for the notebook.

Laylamac (77+) displayed a likeable battling attitude as she overcame a final-fence blunder to take a reasonably competitive contest. The step up to winners’ company should not pose any great difficulties.

Sydney Paget (111+) looked just as good here on his seasonal reappearance as he had done through all of last season, gamely defeating a competitive field likely to produce a number of subsequent winners. The winner ranks highly among this season’s open performers.

Keep Stormin (87+) picked up smartly after the final fence and he can pick up a track bracket in handicap company.

If You Say Run (83+) looks a smart mare. Her attitude, along with undoubted ability, is sure to see her win plenty of races through her career.

Dimple (90+) arrived here with plenty of track form and won convincingly. The step to winners company will be a smooth transition and he would be a live candidate for a maiden hunter chase.

Moneystown (78+) followed up two runner-up placings with a hard-fought success. The runner-up looked smart, ensuring this is likely an above-average maiden. A track career looks assured for the winner.

Touchy (87+) has finished second twice this season and deserved this victory. She is one of the better mares at this level.

Followmeuptocarlow (105+) looks a smart open recruit and on the right courses could be one capable of rattling up a sequence.

Buzzkillbob (86+) raced clear of his rivals and could well be suited by a drop back in trip. He could play a notable role in middle-distance handicap races.