Jester Jet ready for Warwick take-off after some smart schooling 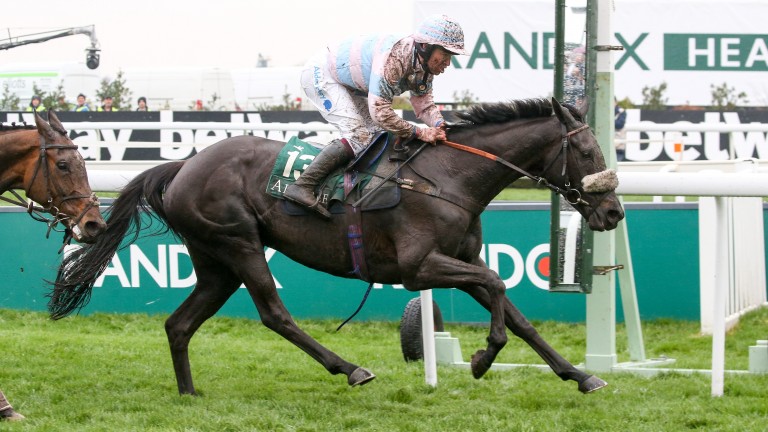 The second running of the Listed 2m4f mares' novice chase (1.25) at Warwick on Thursday has attracted seven runners, including the Gordon Elliott-trained Mrs Lovett.

Top on ratings is Jester Jet, who is 11lb clear of her rivals after finishing a length and a quarter behind the talented Maria's Benefit over an inadequate 2m1½f at Bangor last time.

Jester Jet should relish the return to two and a half miles as she won a Grade 3 handicap hurdle over the trip at Aintree's Grand National meeting, and trainer Tom Lacey said: "This has always been the early-season target for Jester Jet. We dropped her back to an extended two miles at Bangor last time to give her some more experience over fences and we were delighted with how she ran."

He added: "She has been a bit careful up to now over fences, as you would expect, but she's schooled well recently and we are looking forward to seeing her run. This looks like a decent opportunity."

Henry Daly won the inaugural running of the contest in 2016 with Briery Belle and relies on Atlanta Ablaze this time, who is more experienced than most and will be having her eighth outing over fences.

The seven-year-old landed successive handicap wins at Bangor and Hereford in the autumn but was only third to Rons Dream at this level at Market Rasen last month.

Daly said: "I was a bit disappointed with how Atlanta Ablaze travelled at Market Rasen and, although that was three miles, she wouldn't have won at any trip. She has plenty of experience and hopefully can put it to good use."

Of the remainder the most interesting contender by far is Mrs Lovett, who is making her first start in Britain and is on a hat-trick following wins at Thurles and Fairyhouse.

Anthony Bromley, racing manager to owners Simon Munir and Isaac Souede, said: "This is a big step up going into a Listed race but if she could pick up some black type that would be great for her paddock value.

"She's going the right way but I'd say we're hopeful rather than confident."

James Doyle's decision to head to Chelmsford for just one ride in the evening could be significant. He partners well-bred newcomer Divine Image in the mile fillies' novice stakes (5.45).

The Charlie Appleby-trained juvenile must have been one of the last of Scat Daddy's offspring to be sold at auction when knocked down to Godolphin for €360,000 at the Arqana breeze-up in May.

Appleby, who has just a handful left to run on the all-weather this side of Christmas, said: "Divine Image has been showing up well in her work and we expect her to be competitive.

"Obviously there look to be a few in there, as you would expect, but our filly has a decent draw and should give a good account."

Divine Image features among a field of 15. John Gosden has three runners, including the twice-placed Jadeerah.

Perhaps the most intriguing runner over jumps on Thursday is seven-year-old Uncle Bobby, who contests the 2m novice chase (1.45) at Newcastle.

The Mick Easterby-trained gelding has not run since he was a two-year-old, and last competed over six furlongs at Hamilton in September 2013.

He makes his chasing debut in a strong nine-runner race featuring Hawk High, Stowaway Magic and The Vocalist.

Assistant trainer David Easterby said: "The owner-breeder took him off the track and went three-day eventing with him. For a long time he's been saying what a good jumper he is, so he's come back to us and we're going to go chasing.

"He's shown himself a very good jumper schooling at home and leads some of our best horses up on the gallops, but on breeding the trip is definitely something of a misnomer."

Getaway Katie Mai, winner of the Grade 2 mares' bumper at Aintree in April before being snapped up by JP McManus, makes her second appearance over hurdles in the opening 2m mares' maiden hurdle (12.25) at Tramore.

Getaway Katie Mai, who chased home subsequent Cheltenham heroine Relegate at Leopardstown before winning at Aintree, was a beaten favourite on her hurdling debut at Galway in October but her trainer thinks she has improved for that outing and reports her to be in rude health.

"She's come out of her Galway run in good shape and we think she's improved in the meantime," said Dungarvan-based John Queally.

"I was reasonably happy with her run at Galway. The winner got a very good ride on the day and the race has turned out to be quite hot with a few winners coming out of it."

He added: "We're putting a hood on her for the first time as she can be quite enthusiastic in her races, and we think the hood might help her settle down a little bit."

FIRST PUBLISHED 6:00PM, DEC 12 2018
This has always been the early-season target for Jester Jet