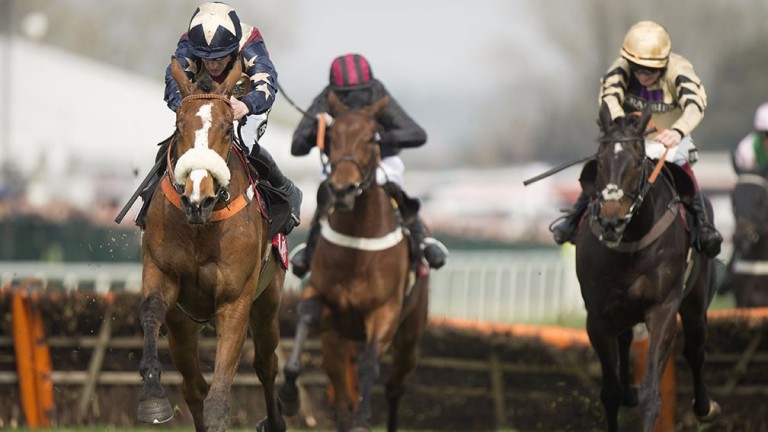 No horse has won the Morebattle Hurdle and landed the Champion Hurdle but one of Kelso's signature contests does have a decent pedigree in terms of festival pointers, and Malcolm Jefferson is eager to find out if Cyrus Darius can seal his Cheltenham place on Thursday.

The eight-year-old, who returned from 485 days off to finish a well-beaten fourth at Haydock last month, is the only horse in the four-runner line-up to be entered in the Champion Hurdle, for which he is 100-1 with sponsor Stan James.

Those odds suggest his chance is limited, but the Morebattle has earned the right to be classed as a Cheltenham trial.

Large Action won the race in 1995 before finishing second to Alderbrook in the Champion Hurdle, while Peddlers Cross found only Hurricane Fly too good in 2011 after winning this.

Zaynar suffered a shock defeat at 1-14 in the 2010 edition, but finished third in that year's Champion Hurdle, while Simonsig struck in the 2012 Morebattle before capturing the Neptune Investment Management Novices' Hurdle at the festival a month later.

Whether Cyrus Darius runs at Cheltenham will be determined by how he gets on in Thursday's £25,000 prize.

Jefferson said: "He's come out of Haydock grand and has done quite a bit of work since. I'm looking forward to running him and then we'll decide on plans. I've left him in the Champion Hurdle, but we'll see what happens.

"It's always difficult coming out at this time of year and my fella is a big horse, so we knew he'd need the race at Haydock. I wanted to get another race into him and this was the obvious place. I wouldn't mind a bit of rain overnight just to loosen the ground up."

Among his rivals is Born Survivor, whose trainer Dan Skelton said said: "I've always thought he wanted to go up in trip but if you were stood in the stands for his last couple of runs you might think he didn't stay. We're dropping back in trip and I'm really looking forward to running."

Nicky Richards is hoping One For Harry can go one better than 12 months ago.

"He was second last year and this year's race doesn't look quite as good as last year," he said. "He's in good order and won well at Wetherby last time. He'll like the ground and handles the track well so I'm hopeful he'll run another good race."

Knockara Beau is the likely outsider but knows a thing or two about upsetting the odds, having landed the 2014 Cleeve Hurdle at 66-1.

FIRST PUBLISHED 6:00PM, FEB 15 2017
I've always thought he wanted to go up in trip, but if you were stood in the stands for his last couple of runs you might think he didn't stay so we're dropping back in trip