Jardine hoping for another Traditional result 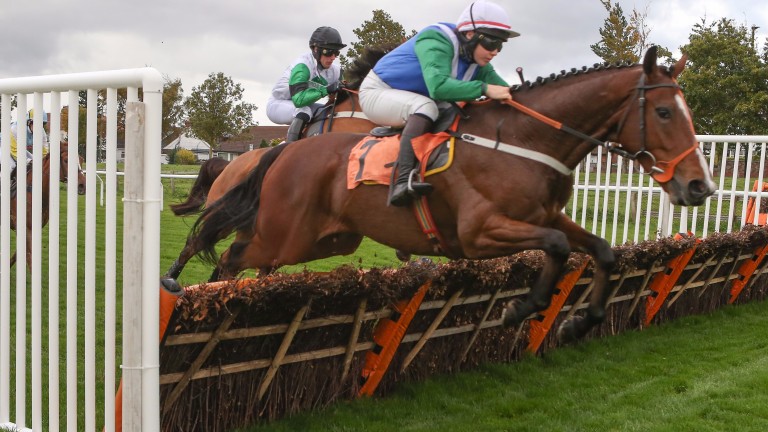 County set: Dominada and Megan Carberry in winning form at Carlisle earlier in the season
John Grossick
1 of 1
By Bruce Jackson 6:00PM, FEB 3 2017

Southern stables were beaten off a year ago in this feature and the architect of Scottish success Iain Jardine is back again with another contender in Traditional Dancer, ridden by last year's successful rider Shane Shortall.

Aristo Du Plessis was favourite for the race a year ago on the back of six wins around one fall but the James Ewart hurdler disappointed in fifth. He has not been in the same form this season but has dropped 15lb in the handicap.

Drumcliff is another top-notch runner for owner JP McManus, who could be in for a good afternoon in the big races.

Eight of the last ten winners have been six-year-olds and only Drumcliff and London Prize are that age in the field of ten.

Harry Fry and Paul Nicholls bid to join John Ferguson, Nicky Henderson and David Pipe as southern raiders to have won this feature in the last ten years.

Divided weights. Five of the last ten winners carried 10st 5lb or less but Brick Red defied 11st 12lb three years ago and there have been four who carried 11st or more.

Dan Skelton, trainer of Optimus Prime
We've had this race in mind for a while. The track will suit him and Bridget [Andrews] takes off a handy 3lb.

Paul Nicholls, trainer of Diego Du Charmil
Diego goes well fresh and he's on a tough enough mark, but I was keen to get him on some good ground.

Iain Jardine, trainer of Traditional Dancer
It's taken a while to find the key to him, which is the trip. He's a two-miler, which he showed when just beaten by a Cheltenham Festival winner in Superb Story at the course last time. I'd like to think he can win the race for us again after Shrewd last year. I can see him running a huge race.

Brian Ellison, trainer of Dominada
He won well at the last meeting but has gone up 26lb this season after another 11lb for that win. He has been working well and is in great form.

Richard Ryan, assistant to Ian Williams, trainer of London Prize and Cool Sky
London Prize is also in a novice on Sunday there and Cool Sky has been in some competitive strongly run races. Both are in good form and will be suited by the track but don't want any softening of the ground.

Harry Fry, trainer of Drumcliff
Good ground is key to his chances and he was unfortunate when second last time as he didn't get much luck in running, but the form has worked out well with William H Bonney winning at Cheltenham last weekend.

Lucinda Russell, trainer of Deepsand
This is a big step up in class for him and a big change in the conditions. He has run round Musselburgh before but only on the Flat.