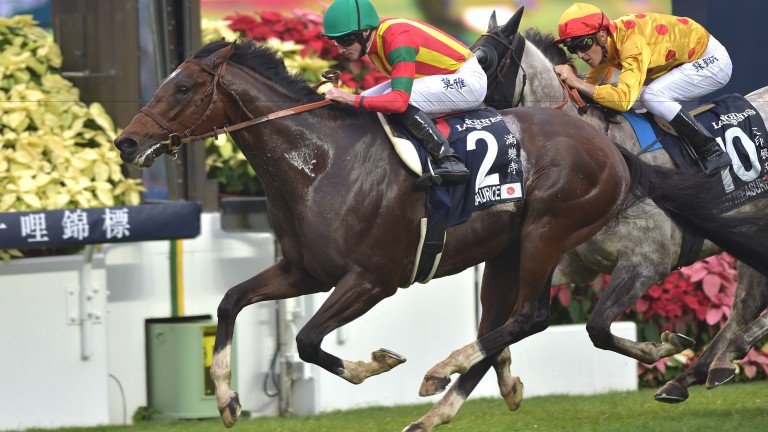 Ryan Moore goes for another Hong Kong win on 2015 Japanese Horse of the Year Maurice
Hugh Routledge
1 of 1
By Stuart Riley in Hong Kong 6:00PM, DEC 9 2016

If you rewatch A Shin Hikari's victory in this race last year, or the demolition job he performed at Chantilly in the Prix d'Ispahan, it is difficult to escape the conclusion that it would take a monstrous weapon to defeat him, but in his homeland that is exactly what they believe they have in Maurice.

In a country where the only power higher than Deep Impact is Buddha, it is notable how often the seven-time Group 1 winner's name pops up in connection with Japan's latest superstar. They really believe he is that good.

This will be Maurice's final start, as it will for A Shin Hikari, and it looks set to be a battle royal between the Far East's two fantastic beasts.

Maurice, last year's Hong Kong Mile winner, has run only twice at a mile and a quarter but he won over the distance last time out in the Grade 1 Tenno Sho (Autumn) in October and his jockey Ryan Moore believes Tokyo is a more testing track than Sha Tin.

A Shin Hikari on familiar path

A Shin Hikari was only 12th behind Maurice in the Tenno Sho (Autumn), beaten eight and a half lengths and registering an RPR of 105. But that was his first start since being injured at Royal Ascot, so he should improve for the run, and he was a 7-2 shot that day. Add the fact that he was ninth in last year's Tenno Sho (Autumn) with an RPR of 107 and a repeat of his blistering performance last year, from the perfect draw this time, suddenly seems much more likely.

Masanori Sakaguchi, trainer of A Shin Hikari
It's a very good draw. Actually four to five was my ideal. He's in very good form and I'm happy with his work. The track looks better than last year. I think his big opponents will be the other Japanese horses. I hope he can set the pace and lead the field until the finish.

Ryan Moore, rider of Maurice
Tokyo is probably a stiffer 2,000m [1m2f], so I don't think the distance will be a problem. He's a high-quality colt and I'm looking forward to the ride.

John Moore, trainer of Designs On Rome
He surprised us all with his first win after surgery, but that took a lot out of him and his next run showed that. He ran okay and still showed his turn of foot. The race might not be run to suit as he could have a lot of ground to make up.

Hugh Bowman, rider of Lovely Day
On his best form he could win, for sure. His form probably isn't up to the same standard as his Japanese rivals. I'm hopeful but expectations are neutral.

Zac Purton, rider of Secret Weapon
He won the Cup trial the other day and it's going to be a fast-run race, which will suit him. He has a chance.