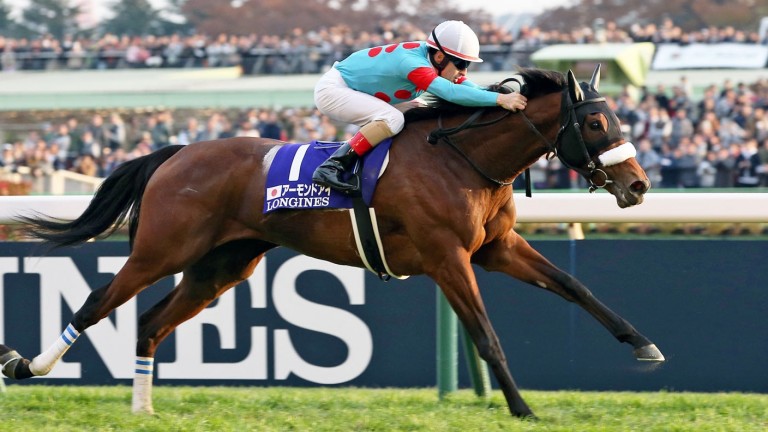 Almond Eye and Christophe Lemaire stretch out to Japan Cup glory
JRA
1 of 1
By Masakazu Takahashi 11:14AM, MAR 14 2019

Almond Eye, who won the Japanese Fillies' Triple Crown last year, will head to Meydan to contest the Dubai Turf on March 30 after pleasing connections in a workout on Wednesday morning.

Voted Japanese Horse of the Year after a stunning unbeaten three-year-old campaign highlighted by her Japan Cup success, Almond Eye is set to make her first trip abroad.

Christophe Lemaire has ridden the filly in all four of her Group 1 victories, and he said: "Her movement was better than last week. After working she got her breath back quickly and wasn't tired. Her condition is getting better and better.

"I know her potential so I want to ride her with confidence. I would like to go to the Arc de Triomphe with her in the autumn and Dubai is her first major hurdle."

He added: "Though this is her first trip abroad, she will soon adapt to the new environment because she is intelligent."

Almond Eye, who is a best-priced 10-1 chance with British and Irish bookmakers for the Arc, had last year the appearance of a filly yet to fill her frame, and trainer Sakae Kunieda said: "I think her condition is very good. After the returning from the winter break her body had developed, and the muscles increased."

Vivlos is set to join Almond Eye in Dubai and has entered quarantine. Tenno Sho winner Rey De Oro will also travel, along with Deirdre, Suave Richard and Cheval Grand.