Japanese challengers in line for $1m bonus for winning Belmont 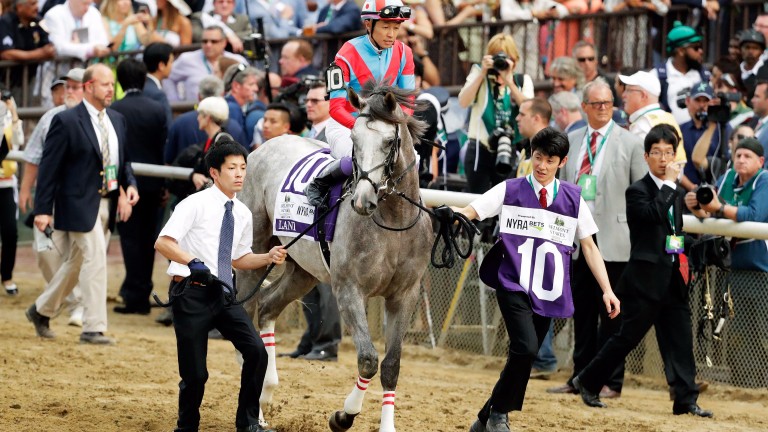 New York racing officials have become the latest to attempt to lure some of Japan’s burgeoning middle-distance talent to their shores by offering a $1 million bonus for any horse trained in that country who wins this year’s Belmont Stakes, the third leg of the US Triple Crown.

The New York Racing Association bonus would more than double the $800,000 share of the purse for the winner for any successful Japanese raider and is a clear indication that US authorities are serious about attracting the country’s horsemen as well as the potential to harness the ferocious power of the Japan Racing Association’s nascent overseas betting operation.

In 2016 the JRA provided domestic pool betting on a limited diary of international races for the first time, producing a staggering ¥9.5 billion (more than £65m) combined turnover for the Arc, the Melbourne Cup, the Breeders’ Cup Filly and Mare Turf and the four Hong Kong International races.

"With Japan opening their simulcast markets to the world on a limited basis, we believe this has the potential for incredible growth for racing here in the US," said Martin Panza, the NYRA's senior vice president of racing operations. "In NYRA's talks with Japanese officials, they have conveyed to us that races with Japanese horses would be preferred for simulcasting.

"Japan has some of the most enthusiastic racing fans in the world and we've been working on this with Churchill Downs officials, who have implemented the 'Japan Road to the Kentucky Derby' this year, as a way to help attract these horses to the United States, enhancing the entire Triple Crown program."

The Mikio Matsunaga-trained Lani finished third in the 2016 Belmont, matching the 2002 effort of Sunday Break, who also raced in the red and blue silks of owner Koji Maeda.

Lani was the first Japanese-trained horse to compete in all three legs of the Triple Crown, having also finished ninth in the Kentucky Derby and fifth in the Preakness Stakes.