Japanese ace Kiseki's bid for Vase in doubt because of ringworm 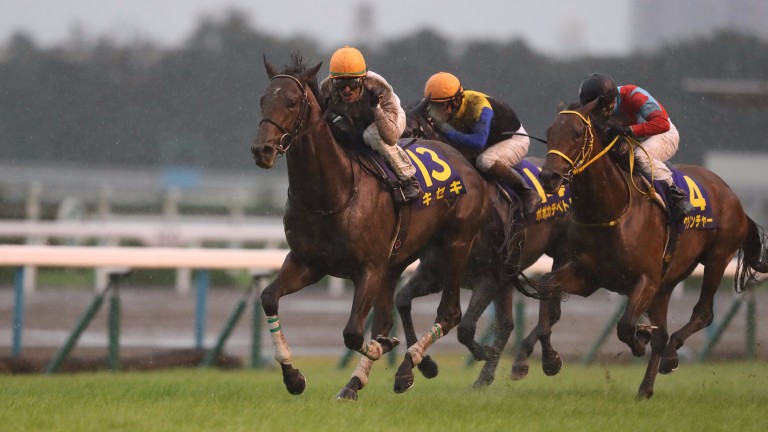 The participation of Japanese St Leger winner Kiseki in Sunday′s Hong Kong Vase at Sha Tin, for which he is second favourite behind Highland Reel, is in doubt after the three-year-old was found to have symptoms of ringworm on arrival last week.

Katsuhiko Sumii’s star stayer was found to have infections on his left fore and rump last Thursday, with further samples set to be taken on Wednesday to determine whether he will be able to contest the HK$18 million (approximately £1.72m/€1.94m) race.

Connections are required to file a pre-travel vet inspection form before arriving, with Hong Kong Jockey Club officials disappointed that ringworm was not disclosed.

Hair samples have been taken from Kiseki, who has been placed in isolation.

Kiseki is a best price 4-1 shot with Ladbrokes and Coral to land the Hong Kong Vase, while 2015 race winner Highland Reel is the general 5-2 favourite.

Dr Peter Curl, the Hong Kong Jockey Club’s executive manager of veterinary regulation, told the South China Morning Post: “If we get a series of negative results then we can be confident there is no risk of infecting other horses and Kiseki should be able to run.

“The lesions can take five or six weeks to clear up but, while that is happening, the horse can be in an infected or non-infected state, so hopefully we'll see him in a non-infected state when he needs to be cleared to run.

“In terms of ringworm’s effect on a horse, it’s mostly an aesthetic thing – it doesn’t look very nice. It doesn’t lead to lameness but, if the infection is extensive, putting a girth strap on the horse can be a problem.

“But the reason it's important to keep out is that it's highly contagious. The fungus releases spores into the surrounding environment that are quite resilient and last a long time, so infections can flare up over and over.”

Highland Reel is one of five intended runners from Britain and Ireland in the Vase, along with Max Dynamite, Smart Call, Chemical Charge and Danehill Kodiac.

Danehill Kodiac, a best price 40-1 with Ladbrokes, is set to represent Richard Hannon, with the trainer's travelling head lad Tony Gorman pleased with how the Cumberland Lodge winner has acclimatised.

Gorman said on Monday: "He's travelled over super and was very fresh this morning.

"He'll do some more serious work on the grass later in the week when the boss is here, but he's very fit already.

"The owners arrive in Hong Kong over the next couple of days and you'll know when they're here – they're a very enthusiastic lot!"

Look back on the best Flat action of the year in the new edition of the Racing Post Annual. Order now at racingpost.com/shop or call 01933 304858

FIRST PUBLISHED 12:36PM, DEC 4 2017
If we get a series of negative results then we can be comfortable that there is no risk of infecting other horses